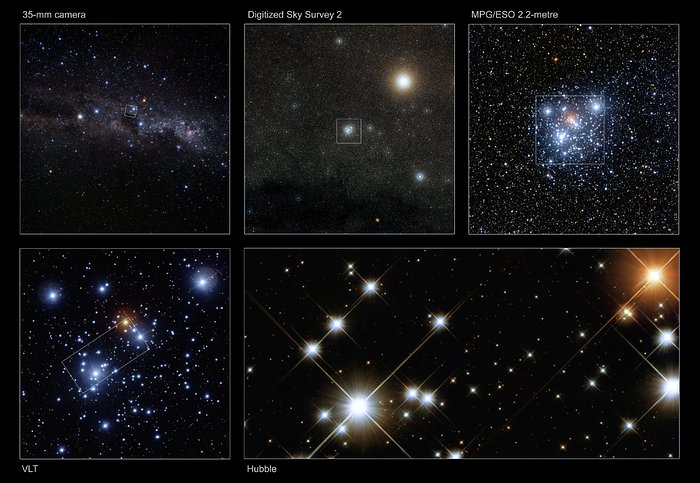 This composite image serves as a still "zoom-in", showing the rich star field in which NGC 4755 nestles and then moving in to the detailed Hubble image of the Kappa Crucis Cluster, or Jewel Box, itself.

The range of images begins with a very wide-field view of the sky surrounding NGC 4755. The images then progressively "zoom in" to reveal a "close-up" of the Jewel Box, featuring several very bright, pale blue supergiant stars, a solitary ruby-red supergiant and a variety of other brilliantly coloured stars.

The picture on the top left was taken from the ground with a 35-mm camera. The next image is from the Digitized Sky Survey 2, a large digital atlas of the sky. Next is a very sharp image from the Wide Field Imager (WFI) on the MPG/ESO 2.2-metre telescope at ESO's La Silla Observatory

The first image (left) on the bottom row was taken by the FORS1 instrument on the ESO Very Large Telescope at ESO's Paranal Observatory. The last image (at bottom right) is the one taken by the legendary (and now retired) WFPC2 aboard Hubble.