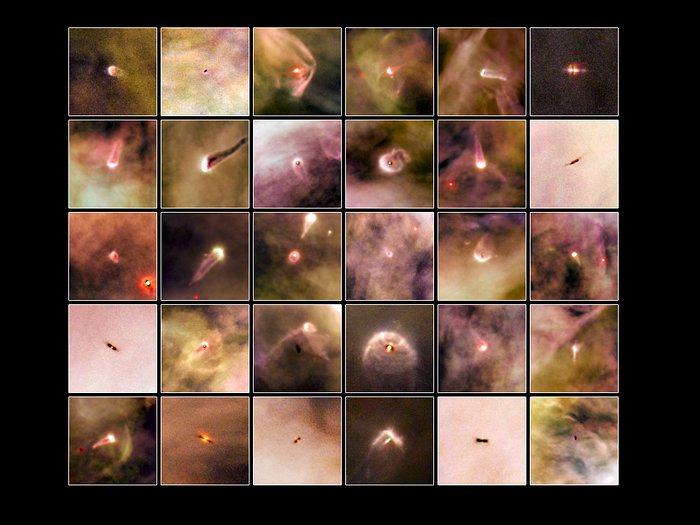 This atlas features 30 proplyds, or protoplanetary discs, that were recently discovered in the majestic Orion Nebula. Using the wide field channel on Hubble’s Advanced Camera for Surveys (ACS), astronomers discovered a total of 42 new discs that could be the seeds of planetary systems to come.

Within the awe-inspiring, gaseous folds of Orion, researchers have identified two different types of discs around young and forming stars: those that lie close to the brightest star in the cluster (Theta 1 Orionis C) and those farther away from it. The bright star heats up the gas in the nearby discs, causing them to shine brightly. The discs that are farther away do not receive enough of the energetic radiation from the star to set the gas ablaze; thus, they can only be detected as dark silhouettes against the background of the bright nebula, as the dust that surrounds these discs absorbs background visible light. By studying these silhouetted discs, astronomers are better able to characterize the properties of the dust grains that are thought to bind together and possibly form planets like our own.

In the brighter discs the excited material produces many glowing cusps, which all face the bright star, but from our point of view are randomly oriented through the nebula, so we see some edge on, and others face on, for instance. Other interesting features enhance the look of these captivating objects, such as emerging jets of matter and shock waves. The dramatic shock waves are formed when the stellar wind from the nearby massive star collides with the gas in the nebula, sculpting boomerang shapes or arrows or even, in the case of 181-825, a space jellyfish!

It is relatively rare to see visible images of proplyds, but the high resolution and sensitivity of Hubble and the Orion Nebula’s proximity to Earth allow for precise views of these potential planetary systems.

This proplyd atlas is the first scientific outcome from the HST Treasury Program on the Orion Nebula.