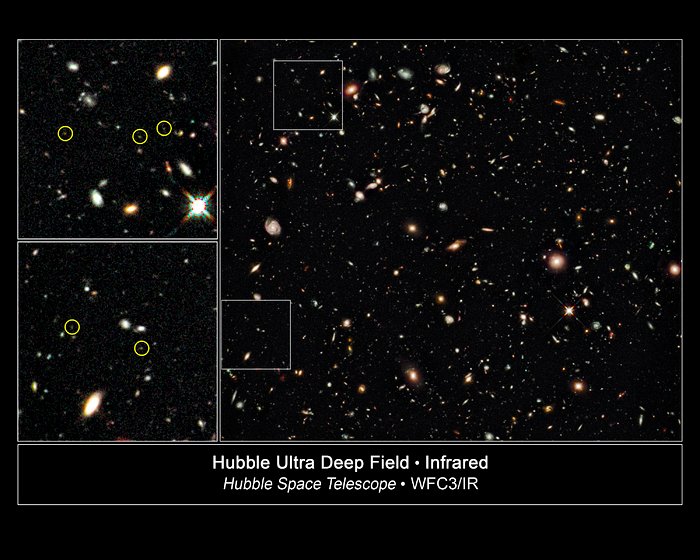 This is the deepest image of the Universe ever taken in near-infrared light by the NASA/ESA Hubble Space Telescope. The faintest and reddest objects (left inset) in the image are galaxies that correspond to lookback times of approximately 12.9 billion years to 13.1 billion years. No galaxies have been seen before at such early epochs. These galaxies are much smaller than the Milky Way galaxy and have populations of stars that are intrinsically very blue. This may indicate the galaxies are so primordial that they are deficient in the heavier elements, and as a result, are quite free of the dust that reddens light through scattering.

The image was taken with Hubble's newly installed Wide Field Camera 3 (WFC3), which collects light from near-infrared wavelengths and therefore looks even deeper into the Universe. The light from very distant galaxies is stretched out of the ultraviolet and visible regions of the spectrum into near-infrared wavelengths by the expansion of the Universe.

Hubble's WFC3 took this image in late August 2009 during a total of four days of pointing for 173 000 seconds of exposure time. Infrared light is invisible and therefore does not have colours that can be perceived by the human eye. The colours in the image are assigned comparatively to short, medium and long near-infrared wavelengths (blue, 1.05 microns; green, 1.25 microns; and red, 1.6 microns). The representation is "natural" in that shorter wavelengths appear blue while longer wavelengths are redder. The faintest objects are about one-billionth as bright as can be seen with the naked eye. The galaxy distances are estimated from the infrared colours of their light.

These Hubble observations are blazing a path for Hubble's successor, the James Webb Space Telescope, which will look even farther into the Universe than Hubble, at infrared wavelengths. The JWST launch is planned for 2014.