The evolution of the Hubble sequence 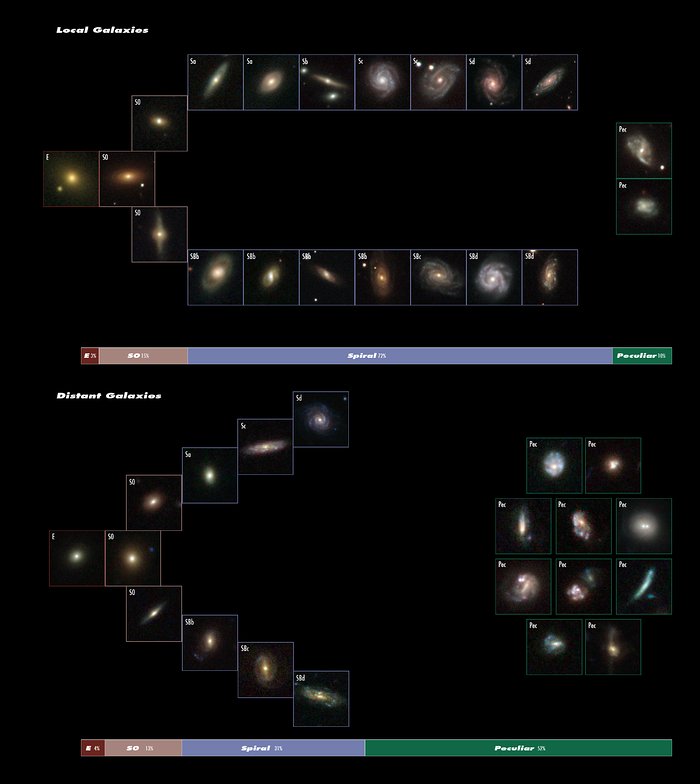 This image created from data taken from both the NASA/ESA Hubble Space Telescope and the Sloan Digital Sky Survey demonstrates that the Hubble sequence six billion years ago was very different from the one that astronomers see today. The two sections show how many more peculiar shaped galaxies (marked Pec) are seen among distant galaxies, as opposed to among local galaxies. The data organisation follows the Hubble tuning-fork classification scheme invented in 1926 by the same Edwin Hubble in whose honour the space telescope is named.

The bottom image represents the make up of the distant galaxies (six billion years ago), showing a much larger fraction of peculiar galaxies. The census found 4 percent of distant galaxies were elliptical, 13 percent lenticular (S0), 31 percent spiral and 52 percent peculiar. This implies that many of the peculiar galaxies ultimately become large spirals. According to the "spiral rebuilding" hypothesis, devised by the astronomers François Hammer, Rodney Delgado-Serrano and their group, this is due to the large number of major, gas-rich galaxy mergers between galaxies that were previously labelled "peculiar" in the distant Universe. It is thought that the large Andromeda galaxy from our neighbourhood formed in this manner.

In total, 116 local galaxies and 148 distant galaxies were sampled. Spiral galaxies are further classified by labels that characterise their appearance; for example, an SBd galaxy means that it is a spiral galaxy that has slightly looser "arms" than an SBa galaxy and a less prominent bulge.

These images were created from data that are part of large sky surveys undertaken by the NASA/ESA Hubble Space Telescope and the 2.5-metre telescope at Apache Point Observatory, New Mexico, USA (Sloan Digital Sky Survey).