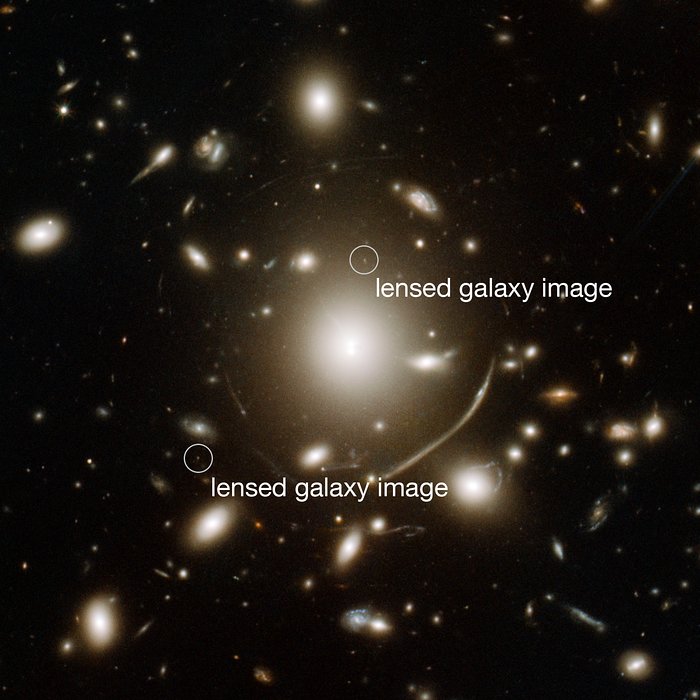 The giant cluster of elliptical galaxies in the centre of this image contains so much dark matter mass that its gravitational field bends light. This means that for very distant galaxies in the background, the cluster acts as a sort of magnifying glass, bending and concentrating the distant object’s light towards Hubble. These gravitational lenses are one tool astronomers can use to extend Hubble’s vision beyond what it would normally be capable of seeing.

Using Abell 383, a team of astronomers have identified and studied a galaxy so far away we see it as it was less than a billion years after the Big Bang. It is visible as two tiny dots (labelled) on either side of the bright cluster galaxy in the centre. Distant objects seen through gravitational lenses are typically multiply imaged and heavily distorted.

Viewing this galaxy through the gravitational lens meant that the scientists were able to discern many intriguing features that would otherwise have remained hidden, including that its stars were unexpectedly old for a galaxy this close in time to the beginning of the Universe. This has profound implications for our understanding of how and when the first galaxies formed, and how the diffuse fog of neutral hydrogen that filled the early Universe was cleared.