Using gravitational lensing to observe the disc around a black hole 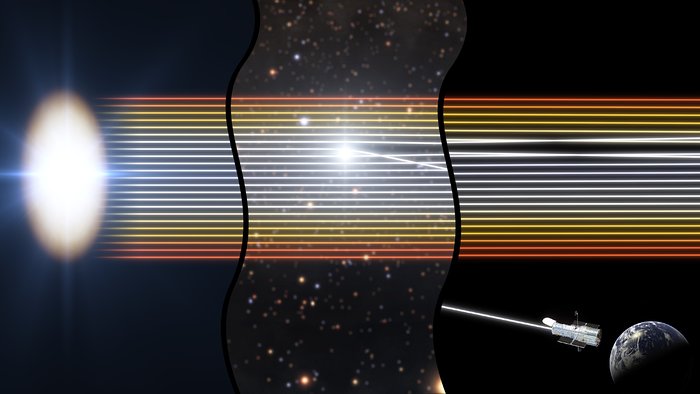 This diagram shows how Hubble is able to observe a quasar, a glowing disc of matter around a distant black hole, even though the black hole would ordinarily be too far away to see clearly.

The diagram shows three different locations: on the left, the quasar accretion disc, which is bluer in the centre and redder around the edges; in the centre, a spot in an intermediate galaxy which the quasar’s light is passing through; and on the right, Hubble’s view in orbit around the Earth.

The gravity from a star in the intermediate galaxy, as it passes through the beams of light from the quasar, deflects the differently coloured beams one-by-one towards Hubble. The colours seen from Hubble therefore change over time as the star effectively scans across the quasar’s disc. This lets astronomers directly observe the colour, temperature and size of the disc with unprecedented precision.

The precision of these observations is equivalent to seeing individual grains of sand on the surface of the Moon.