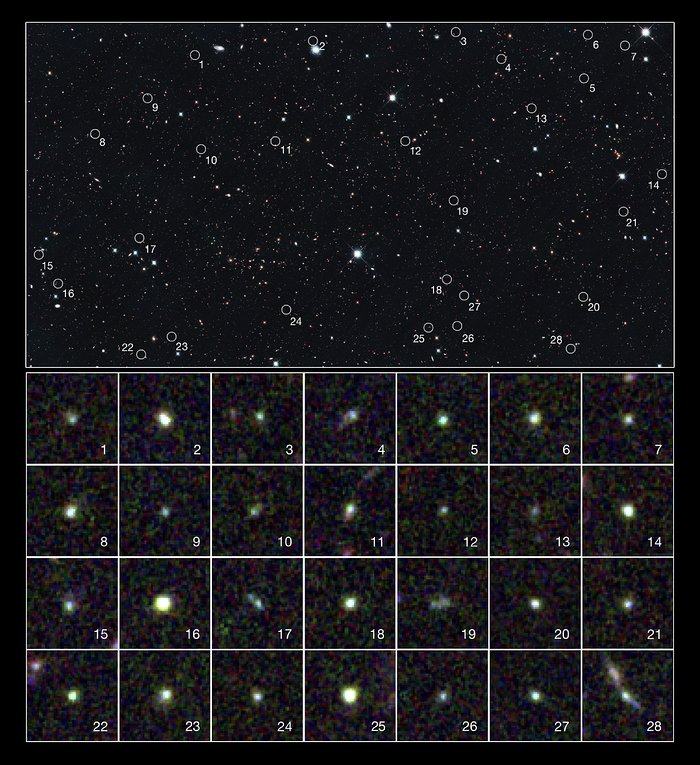 This image reveals 28 tiny galaxies uncovered by the NASA/ESA Hubble Space Telescope. The puny galaxies, shown in the postage-stamp-sized images, existed 9 billion years ago and are brimming with star birth.

The dwarf galaxies are typically a hundred times less massive than the Milky Way galaxy but are churning out stars at such a furious pace that their stellar population would double in just 10 million years. Hubble's Wide Field Camera 3 and Advanced Camera for Surveys spied the galaxies in a field called the UKIDSS Ultra Deep Survey, or UDS, (part of the UKIRT Infrared Deep Sky Survey). The galaxies' locations in the UDS field are marked in the large image.

The galaxies stood out in the Hubble images because the energy from all the new stars caused the oxygen in the gas surrounding them to light up like a bright fluorescent sign. The rapid star birth likely represents an important phase in the formation of dwarf galaxies, the most common galaxy type in the cosmos.

The galaxies are among 69 dwarf galaxies found in the UDS and other fields. The images were made from observations taken between August and December 2010.