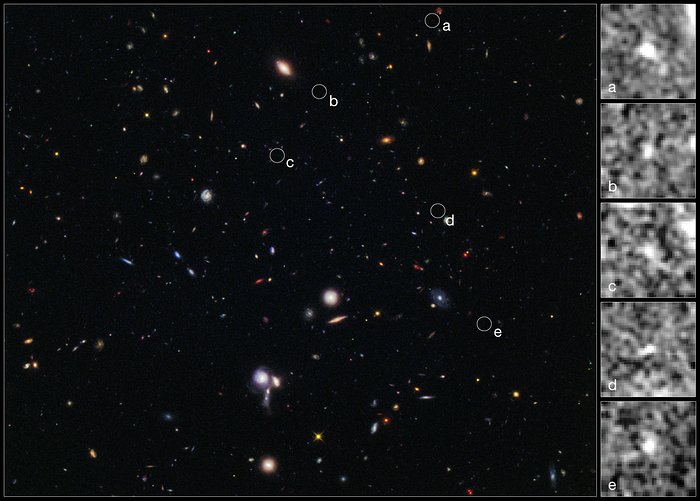 The composite image at left, taken in visible and near-infrared light, reveals the location of five galaxies clustered together just 600 million years after the Universe’s birth in the Big Bang. The circles pinpoint the galaxies.

The sharp-eyed Wide Field Camera 3 aboard the NASA/ESA Hubble Space Telescope spied the galaxies in a random sky survey. The developing cluster is the most distant ever observed.

The average distance between them is comparable to that of the galaxies in the Local Group, consisting of two large spiral galaxies, the Milky Way and the Andromeda Galaxy, and a few dozen small dwarf galaxies.

The close-up images at right, taken in near-infrared light, show the galaxies. Simulations show that the galaxies will eventually merge and form the brightest central galaxy in the cluster, a giant elliptical similar to the Virgo cluster’s Messier 87.

Galaxy clusters are the largest structures in the Universe, comprising hundreds to thousands of galaxies bound together by gravity. The developing cluster presumably will grow into a massive galactic city, similar in size to the nearby Virgo Cluster, a collection of more than 2000 galaxies.