Labelled view of the Tarantula Nebula 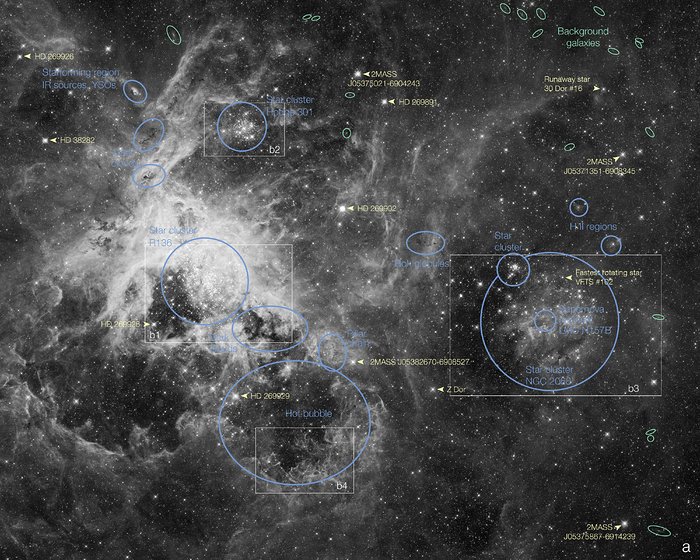 This annotated map identifies several prominent features in an image of the Tarantula Nebula (also known as 30 Doradus), a prominent region of star formation located in the Large Magellanic Cloud (LMC) the nearest neighboring galaxy to the Milky Way. The image was produced from numerous exposures by the Hubble Space Telescope’s Wide Field Camera 3 and Advanced Camera for Surveys through a filter which isolates red and near-infrared light.

Individual stars
Some prominent stars are labeled in yellow. Some of these are identified in the Henry Draper Catalog (HD). The stars labeled 2MASS appear in the catalog of objects identified by the 2-Micron All Sky Survey, relatively brighter in infrared light and faint enough in visible light not to appear in catalogues such as HD based on visual observations.

Particularly significant stars identified are: 30 Dor #16, a “runaway” star ejected from the prominent star cluster 30 Doradus, and VFTS #102, the star with the fastest known rotation rate.

Background galaxies
Several background galaxies are visible in the image, labeled in green, though they appear very small because they are much more distant than the Large Magellanic Cloud. A large amount of gas and dust is associated with the LMC and the Tarantula nebula in particular, obscuring most of the light from more distant sources. Near the edges of the nebula, some galaxies are visible, where the obscuration is not enough to completely block the more distant objects.

These galaxies can provide an absolute reference for measuring the positions and motions of the stars within the Tarantula and the LMC. The motion of these objects is extremely difficult to measure precisely because of the vast distance to the LMC. However with the fine resolution of Hubble’s cameras it is possible to measure the motions in images taken some time apart. The background galaxies are immensely farther away, so their positions within the field of view is essentially fixed, providing a frame of reference against which the positions and motions of the closer objects in the Tarantula and LMC can be compared.

Star clusters
Numerous star clusters are scattered in the Tarantula Nebula region, labeled in blue. They formed at different times from giant clouds of gas and dust. Characteristics of the clusters as a whole and their constituent stars enable astronomers to determine their relative ages. The most massive, hottest stars emit copious high-energy radiation, pushing away, compressing and sculpting the remaining gas and dust, triggering another generation of star formation.

Dark clouds
Dense, cooler, dusty clouds obscure the light from more distant stars appearing dark against stars and glowing gas behind them, here labeled in blue. The smallest, densest dark clouds are known as Bok globules, in which new stars are likely forming.

The rectangles labelled b1, b2, b3, b4 correspond to the four close-ups in image heic1206b.