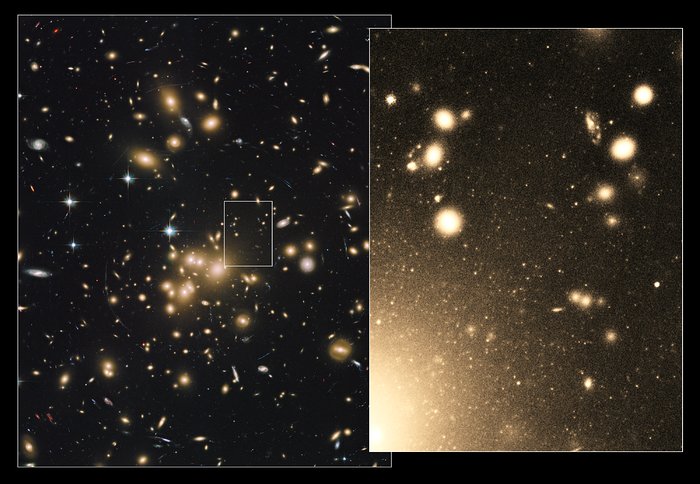 Abell 1689 is one of the biggest and most massive galaxy clusters known – so massive that it warps the space around it, bending and enhancing the light from galaxies lying far beyond it like a cosmic magnifying glass.

But there is more going on here than initially meets the eye. Peering deep into the heart of the massive galaxy cluster Abell 1689, the NASA/ESA Hubble Space Telescope recently spied some 10 000 globular clusters. From this, the astronomers estimate that this galaxy cluster could possibly contain over 160 000 globulars overall, the largest population ever found in such a cluster. By comparison, our  galaxy, the Milky Way, hosts about 150 such clusters.

By studying the globular clusters within this massive and distant galaxy cluster, the astronomers also found that these globulars are reliable tracers of the amount of dark matter contained within galaxy clusters like Abell 1689. Globular clusters are dense collections of hundreds of thousands of stars – some of the oldest surviving stars in the Universe.

The image on the left, taken by Hubble’s Advanced Camera for Surveys (ACS), shows the numerous galaxies that make up Abell 1689. The box near the centre outlines one of the regions sampled by Hubble, containing a rich collection of globular clusters.

The view on the right zooms into the region of this cluster that has been found to be packed with globular clusters. They appear as thousands of tiny white dots, like a blizzard of snowflakes. The larger white blobs are entire galaxies full of stars.