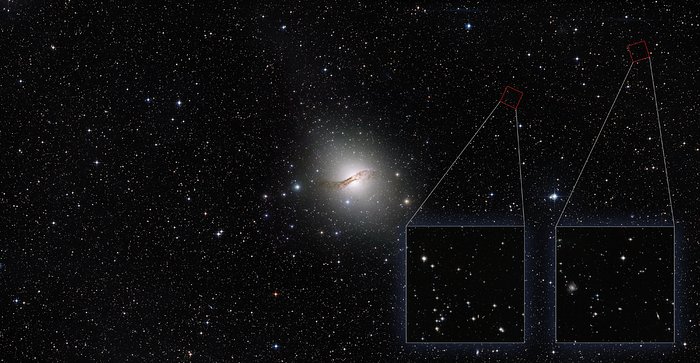 This image shows the stunning elliptical galaxy Centaurus A. Recently, astronomers have used the NASA/ESA Hubble Space Telescope to probe the outskirts of this galaxy to learn more about its dim halo of stars.

Two of the areas probed with Hubble are shown here in the red squares, and in more detail in the insets. Other areas were probed even further away, beyond the field of view of this image.

Hubble’s unique capabilities allowed astronomers to analyse the faint stars in the halo.

The galaxy’s halo of stars has been found to reach much further than expected, extending across 4 degrees in the sky — equivalent to eight times the apparent width of the Moon, or almost twice the width of this image.

This image is a composite of images from Digitized Sky Survey 2 (DSS2), the MPG/ESO 2.2-metre telescope and the NASA/ESA Hubble Space Telescope’s Advanced Camera for Surveys (ACS).