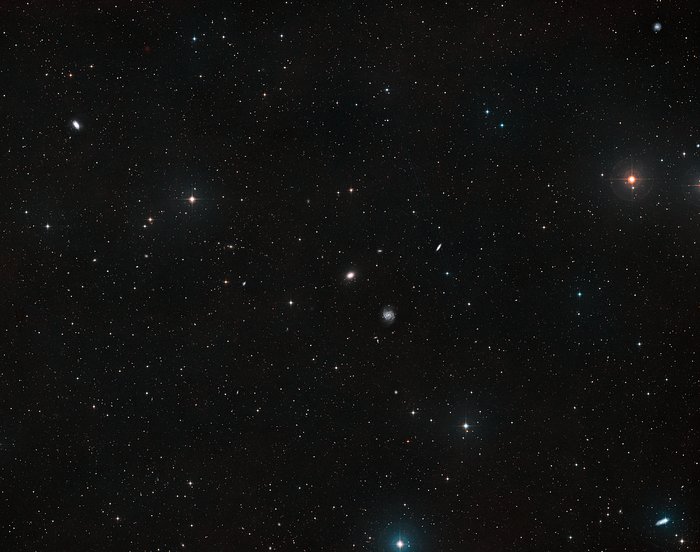 This image shows the sky around the ultra diffuse galaxies NGC 1052-DF4 and NGC 1052-DF2. It was created from images forming part of the Digitized Sky Survey 2. NGC 1052-DF2 is basically invisible in this image.

In 2018 an international team of researchers using the NASA/ESA Hubble Space Telescope and several other observatories uncovered, for the first time, a galaxy in our cosmic neighbourhood that is missing most of its dark matter. This discovery of the galaxy NGC 1052-DF2 was a surprise to astronomers, as it was understood that Dark matter (DM) is a key constituent in current models of galaxy formation and evolution. In fact, without the presence of DM, the primordial gas would lack enough gravity pull to start collapsing and forming new galaxies. A year later, another galaxy that misses dark matter was discovered, NGC 1052-DF4, which further triggered intense debates among astronomers about the nature of these objects.

Now, new Hubble data have been used to explain the reason behind the missing dark matter in NGC 1052-DF4, which resides 45 million light-years away, providing further evidence for tidal disruption. By studying the galaxy’s light and globular cluster distribution, astronomers have concluded that the gravity forces of the neighbouring galaxy NGC 1035 stripped the dark matter from NGC 1052-DF4 and are now tearing the galaxy apart.