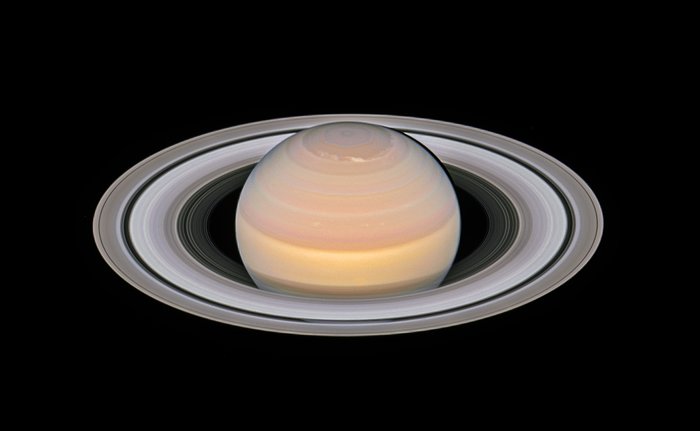 The NASA/ESA Hubble Space Telescope was used to observe the planet on 6 June 2018, when Saturn was approximately 1.4 billion kilometres from Earth. Visible in this Hubble image are the classic rings as recorded by the very first astronomers to observe the planet with telescopes. From the outside in are the A ring with the Encke Gap, the Cassini Division, the B ring, and the C ring with the Maxwell Gap.

Data from NASA’s Cassini mission suggest that the rings formed about 200 million years ago, roughly around the time of the dinosaurs during the Jurassic period. The gravitational disintegration of one of Saturn’s small moons created myriad icy debris particles and collisions lasting until today; it is likely that they continually replenish the rings.

The planet’s banded structure, clearly visible in the new image, is caused by the winds and the clouds at different altitudes.

NASA, ESA, A. Simon (GSFC) and the OPAL Team, and J. DePasquale (STScI)