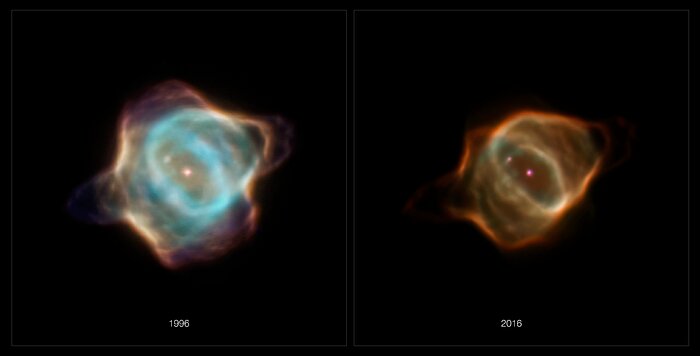 Archival data from the NASA/ESA Hubble Space Telescope reveal that the nebula Hen 3-1357, nicknamed the Stingray nebula, has faded precipitously over just the past two decades. Witnessing such a swift rate of change in a planetary nebula is exceedingly rare, say researchers.

These images captured by Hubble in 1996 (left), when compared to Hubble images taken in 2016 (right), show a nebula that has drastically dimmed in brightness and changed shape. Bright blue shells of gas near the centre of the nebula have all but disappeared, and the wavy edges that earned this nebula its aquatic-themed name are virtually gone. The young nebula no longer pops against the black velvet background of the distant Universe.