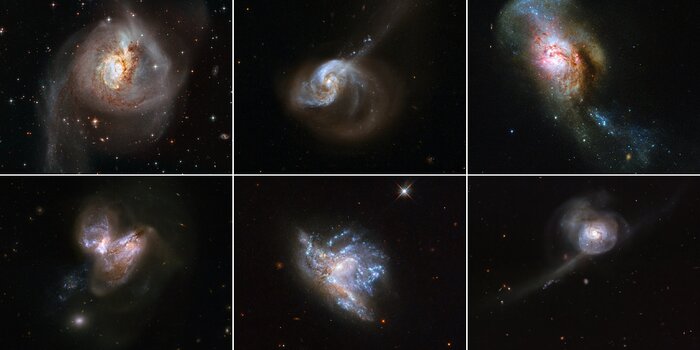 To celebrate a new year, the NASA/ESA Space Telescope has published a montage of six beautiful galaxy mergers. Each of these merging systems was studied as part of the recent HiPEEC survey to investigate the rate of new star formation within such systems. These interactions are a key aspect of galaxy evolution and are among the most spectacular events in the lifetime of a galaxy.

Top left: NGC 3256
This image of NGC 3256 was taken with the Wide Field Camera 3 (WFC3) and the Advanced Camera for Surveys (ACS), both installed on the NASA/ESA Hubble Space Telescope. The galaxy is about 100 million light-years from Earth and provides an ideal target in which to investigate starbursts that have been triggered by galaxy mergers.

Top Middle: NGC 1614
The galaxy system NGC 1614 has a bright optical centre and two clear inner spiral arms that are fairly symmetrical. It also has a spectacular outer structure that consists principally of a large one-sided curved extension of one of these arms to the lower right, and a long, almost straight tail that emerges from the nucleus and crosses the extended arm to the upper right.

Top Right: NGC 4194
NGC 4194 is also known as the Medusa merger.  An early galaxy consumed a smaller gas-rich system, throwing out streams of stars and dust out into space. These streams, seen rising from the top of the merger galaxy, resemble the writhing snakes that Medusa, a monster in ancient Greek mythology, famously had on her head in place of hair, lending the object its intriguing name. The Medusa merger is located about 130 million light-years away in the constellation of Ursa Major (The Great Bear).

Bottom Left: NGC 3690
This system consists of a pair of galaxies, dubbed IC 694 and NGC 3690, which made a close pass some 700 million years ago. As a result of this interaction, the system underwent a fierce burst of star formation. In the last fifteen years or so six supernovae have popped off in the outer reaches of the galaxy, making this system a distinguished supernova factory.

Bottom Middle: NGC 6052
Located in the constellation of Hercules, about 230 million light-years away, NGC 6052 is a pair of colliding galaxies. They were first discovered in 1784 by William Herschel and were originally classified as a single irregular galaxy because of their odd shape. However, we now know that NGC 6052 actually consists of two galaxies that are in the process of colliding. This particular image of NGC 6052 was taken using Hubble’s Wide Field Camera 3.

Bottom Right: NGC 34
Lying in the constellation Cetus (The Sea Monster), NGC 34’s outer region appears almost translucent, pin pricked with stars and strange wispy tendrils. This image shows the galaxy's bright centre, a result of this merging event that has created a burst of new star formation and lit up the surrounding gas. As the galaxies continue to intertwine and become one, NGC 34’s shape will become more like that of a peculiar galaxy, devoid of any distinct shape.