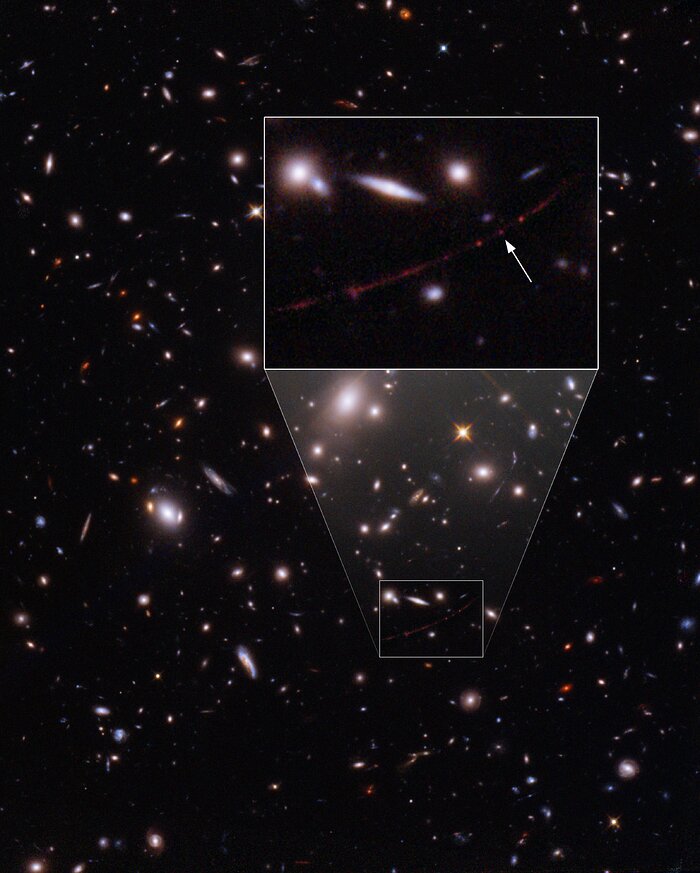 The star nicknamed Earendel (indicated here with an arrow) is positioned along a ripple in spacetime that gives it extreme magnification, allowing it to emerge into view from its host galaxy, which appears as a red smear across the sky. The whole scene is viewed through the distorted lens created by a massive galaxy cluster in the intervening space, which allows the galaxy's features to be seen, but also warps their appearance—an effect astronomers call gravitational lensing. The red dots on either side of Earendel are one star cluster that is mirrored on either side of the ripple, a result of the gravitational lensing distortion. The entire galaxy, called the Sunrise Arc, appears three times, and knots along its length are more mirrored star clusters. Earendel's unique position right along the line of most extreme magnification allows it to be detected, even though it is not a cluster.

With this observation, the NASA/ESA Hubble Space Telescope has established an extraordinary new benchmark: detecting the light of a star that existed within the first billion years after the Universe’s birth in the Big Bang (at a redshift of 6.2) — the most distant individual star ever seen. This sets up a major target for the NASA/ESA/CSA James Webb Space Telescope in its first year.