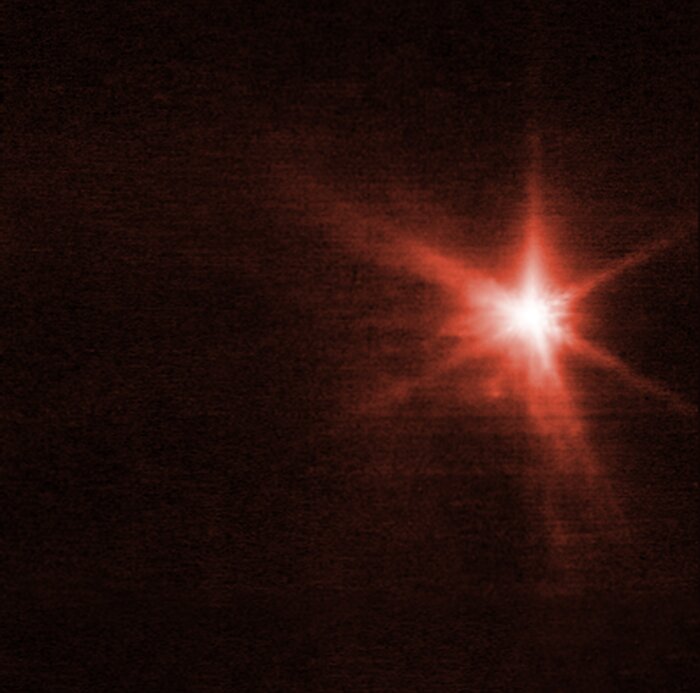 This image from the NASA/ESA/CSA James Webb Space Telescope’s Near-Infrared Camera (NIRCam) instrument shows Dimorphos, the asteroid moonlet in the double-asteroid system of Didymos, about 4 hours after NASA’s Double Asteroid Redirection Test (DART) made impact. A tight, compact core and plumes of material appearing as wisps streaming away from the centre of where the impact took place, are visible in the image. Those sharp points are Webb’s distinctive eight diffraction spikes, an artefact of the telescope’s structure.

These observations, when combined with data from the NASA/ESA Hubble Space Telescope, will allow scientists to gain knowledge about the nature of the surface of Dimorphos, how much material was ejected by the collision, and how fast it was ejected.

In the coming months, scientists will use Webb’s Mid-Infrared Instrument (MIRI) and Near-Infrared Spectrograph (NIRSpec) to observe Dimorphos further. Spectroscopic data will also provide researchers with insight into the asteroid’s chemical composition.

The observations shown here were conducted in the filter F070W (0.7 microns) and assigned the colour red.