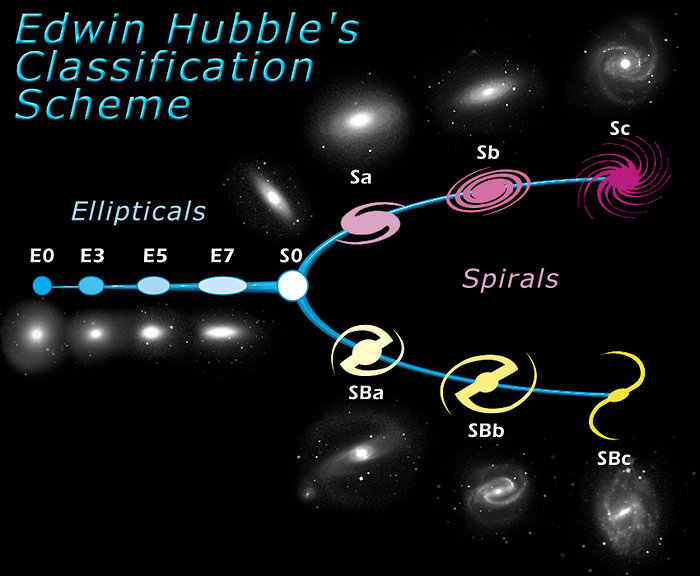 Galaxies are very important fundamental building blocks of the Universe. Some are simple, while others are very complex in structure. As one of the first steps towards a coherent theory of galaxy evolution, the American astronomer Edwin Hubble, developed a classification scheme of galaxies in 1926. Although this scheme, also known as the Hubble tuning fork diagram, is now considered somewhat too simple, the basic ideas still hold.

The spirals were assigned letters from "a" to "c," which characterize the compactness of their spiral arms. "Sa" spirals, for example, are tightly wound whereas "Sc" spirals are more loosely wound. Also it is worth noting that the sizes of the round central regions in spirals - the so-called bulges - increase in size the more tightly the spiral arms are wound. There are indications pointing to a very close connection between the bulges of certain galaxies (Hubble types "S0", "Sa" and "Sb") and elliptical galaxies. They may very well be similar objects.

"S0," or lenticular galaxies, are in the transition zones between ellipticals and spirals and bridge these two types.

For a time the Hubble tuning fork was thought to be an evolutionary sequence - that galaxies might evolve from one type to another progressing from left to right across the tuning-fork diagram. Hence "Sa" and "SBa" galaxies were called "early-type," while "Sc" and "SBc" were called "late-type."

Astronomers still use this nomenclature today, though the initial concept was later found to be an over-simplification. Galaxy evolution is a far more complex process than Hubble imagined, involving the conditions of the galaxy's initial collapse, collisions with other galaxies, and the ebb and flow of internal star birth.