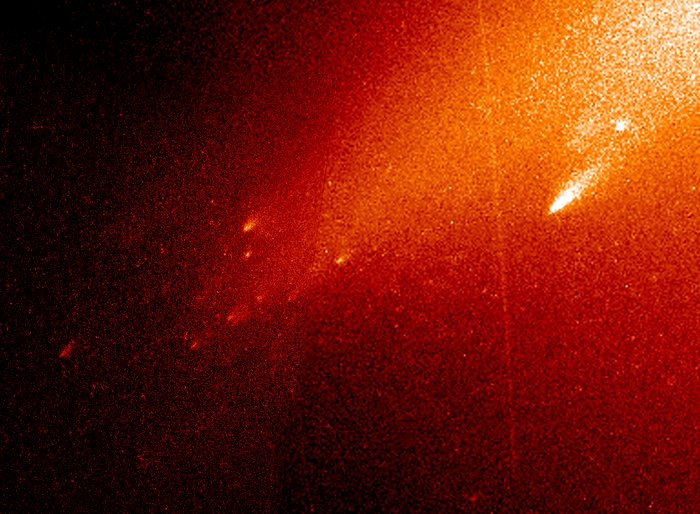 Astronomers analyzing debris from a comet that broke apart lastsummer spied pieces as small as smoke-sized particles and aslarge as football-field-sized fragments. But it's the materialthey didn't see that has aroused their curiosity. Tracking thedoomed comet, named LINEAR, the Hubble telescope and the VeryLarge Telescope in Chile found tiny particles that made up the 2,000-mile-long dust tail and 16 large fragments, some as wide as330 feet. But the telescopes didn't detect any intermediate-sized pieces. If they exist, then the fundamental building blocks that comprised LINEAR's nucleus may be somewhat smaller than currenttheories suggest.

The Hubble picture shows that that LINEAR's nucleus has beenreduced to a shower of glowing "mini-comets" resembling the fiery fragments from an exploding aerial firework. This picture was takenwith Hubble's Wide Field Planetary Camera 2 on August 5, 2000, whenthe comet was at a distance of 64 million miles (102 millionkilometers) from Earth.