Birth of Our Galaxy 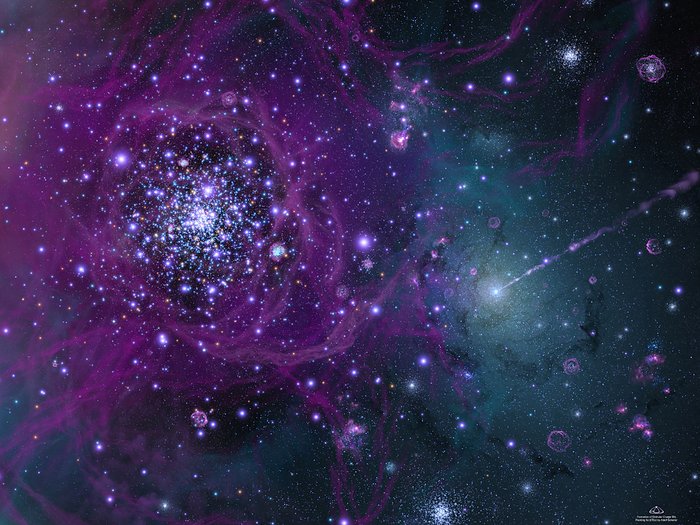 This is an artist's concept of the early formative years of our Milky Way galaxy, circa 12.7 billion years ago. That long ago, the majestic spiral arms of our galaxy had not yet formed; the sky was a sea of globular star clusters.

The bright blue star cluster at center left is among hundreds of primeval globular star clusters that came together to build up the galaxy. This particular cluster survives today as the globular cluster M4 in Scorpius. Astronomers used Hubble to find the oldest burned-out stars - called white dwarfs - in the cluster. The dwarfs serve as 'clocks' for calculating the cluster's age based on temperature. The cluster - chock full young and blue-white stars in this artwork - probably started forming several hundred million years after the big bang.

At right of center, the hub of the galaxy is beginning to form. Lanes of dark dust encircle a young supermassive black hole. An extragalactic jet of high-speed material beams into space from the young black hole, which is engorging itself on stars, gas and dust. A string of supernova explosions from the most massive stars in the cluster creates pink bubbles of hot gas around each star cluster.