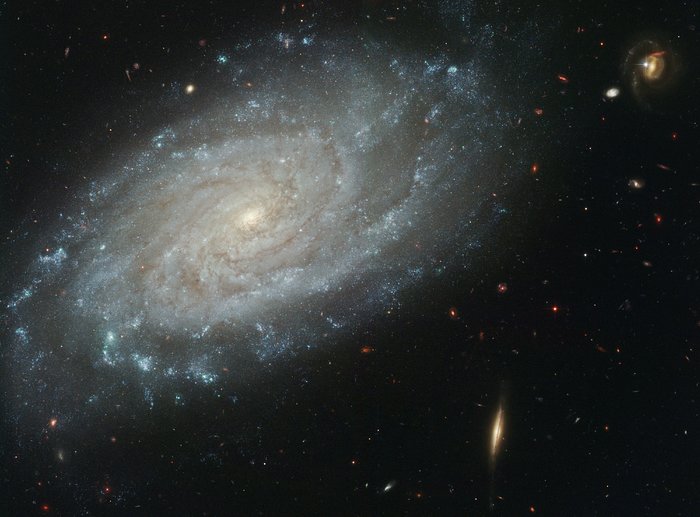 Amid a backdrop of far-off galaxies, the majestic dusty spiral, NGC 3370, looms in the foreground in this NASA/ESA Hubble Space Telescope image. Recent observations taken with the Advanced Camera for Surveys show intricate spiral arm structure spotted with hot areas of new star formation. But this galaxy is more than just a pretty face. Nearly 10 years earlier NGC 3370, in the constellation Leo, hosted a bright exploding star.

In November 1994, the light of a supernova in nearby NGC 3370 reached Earth. This stellar outburst briefly outshone all of the tens of billions of other stars in its galaxy. Although supernovae are common, with one exploding every few seconds somewhere in the universe, this one was special. Designated SN 1994ae, this supernova was one of the nearest and best observed supernovae since the advent of modern, digital detectors. It resides 98 million light-years (30 megaparsecs) from Earth. The supernova was also a member of a special subclass of supernovae, the type Ia, the best tool astronomers have to chart the growth rate of the expanding universe.

NASA/ESA, The Hubble Heritage Team and A. Riess (STScI)