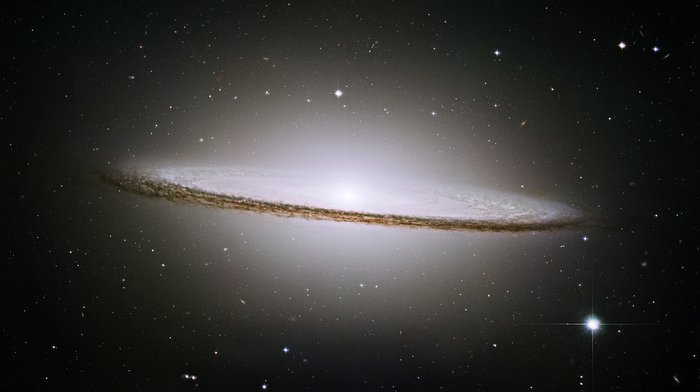 NASA/ESA Hubble Space Telescope has trained its razor-sharp eye on one of the universe's most stately and photogenic galaxies, the Sombrero galaxy, Messier 104 (M104). The galaxy's hallmark is a brilliant white, bulbous core encircled by the thick dust lanes comprising the spiral structure of the galaxy. As seen from Earth, the galaxy is tilted nearly edge-on. We view it from just six degrees north of its equatorial plane. This brilliant galaxy was named the Sombrero because of its resemblance to the broad rim and high-topped Mexican hat.

At a relatively bright magnitude of +8, M104 is just beyond the limit of naked-eye visibility and is easily seen through small telescopes. The Sombrero lies at the southern edge of the rich Virgo cluster of galaxies and is one of the most massive objects in that group, equivalent to 800 billion suns. The galaxy is 50,000 light-years across and is located 30 million light-years from Earth.