The Sombrero Galaxy in Infrared Light 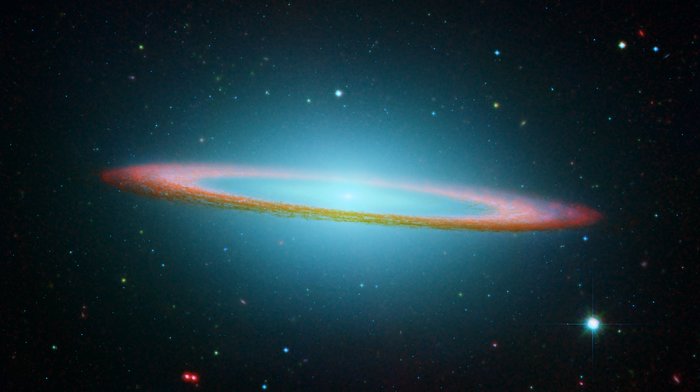 NASA/ESA Hubble Space Telescope and NASA's Spitzer Space Telescope joined forces to create this striking composite image of one of the most popular sights in the universe. Messier 104 is commonly known as the Sombrero galaxy because in visible light, it resembles the broad-brimmed Mexican hat. However, in Spitzer's striking infrared view, the galaxy looks more like a "bull's eye."

Spitzer's full view shows the disk is warped, which is often the result of a gravitational encounter with another galaxy, and clumpy areas spotted in the far edges of the ring indicate young star-forming regions.

The Sombrero galaxy is located some 28 million light-years away. Viewed from Earth, it is just six degrees south of its equatorial plane. Spitzer detected infrared emission not only from the ring, but from the center of the galaxy too, where there is a huge black hole, believed to be a billion times more massive than our Sun.

The Spitzer picture is composed of four images taken at 3.6 (blue), 4.5 (green), 5.8 (orange), and 8.0 (red) microns. The contribution from starlight (measured at 3.6 microns) has been subtracted from the 5.8 and 8-micron images to enhance the visibility of the dust features.