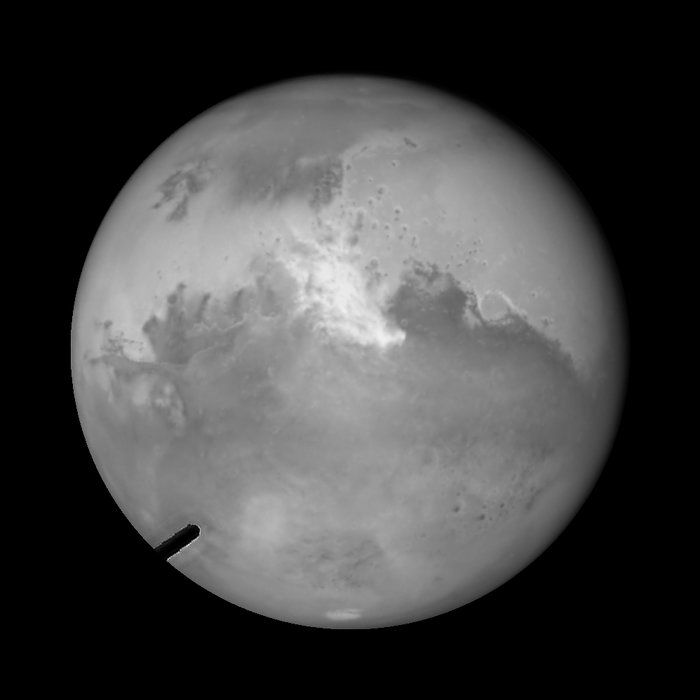 The Advanced Camera for Surveys on Hubble Space Telescope includes two cameras, the Wide Field Channel (WFC) and the High Resolution Channel (HRC). Images from the WFC are roughly 4,000 pixels square with a scale of roughly 0.05 arcseconds per pixel. Images from the HRC are smaller in pixel size, 1,000 pixels square, but have a finer resolution, 0.025 arcseconds per pixel. The HRC is preferred for images of planets, or objects appearing smaller on the sky, where higher resolution outweighs larger field of view. The HRC also has two occulting masks that can block starlight from bright sources, and allow fainter objects nearby that are otherwise lost in the glare of the brighter object to be visible. One of the masks can be removed, but the other mask, seen in this Mars image at the lower left corner, can not be moved out of the light path. This "occulting finger" blocked a small portion of the light from Mars. The small amount of missing data in the final colour composite of Mars was corrected by filling with nearby sections of the image of similar colour and texture. This is a method commonly used in digital photography to remove blemishes, but is not used with data published in scientific papers.