Hubble sees stars and a stripe in celestial fireworks 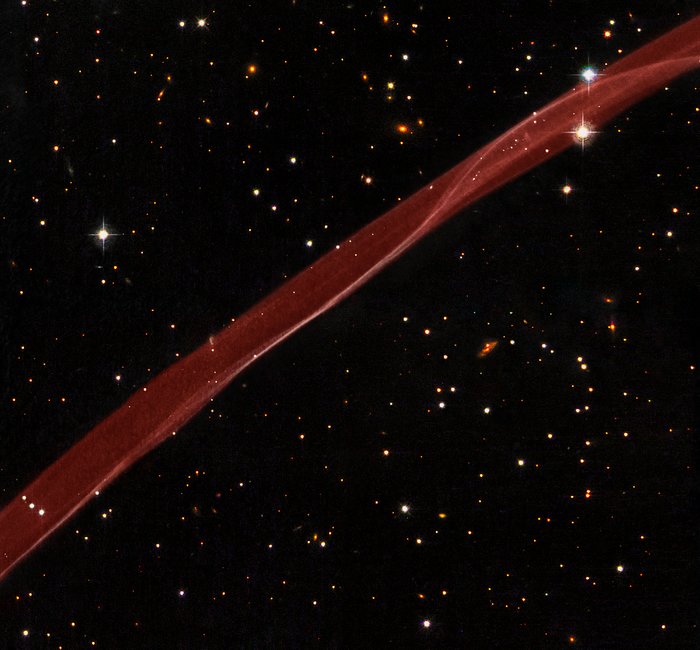 These columns that resemble stalagmites protruding from the floor of a cavern columns are in fact cool interstellar hydrogen gas and dust that act as incubators for new stars. Inside them and on their surface astronomers have found knots or globules of denser gas. These are called EGGs (acronym for "Evaporating Gaseous Globules"). Inside at least some of the EGGs stars being formed.

A delicate ribbon of gas floats eerily in our galaxy. A contrail from an alien spaceship? A jet from a black hole? Actually this image, taken by the NASA/ESA Hubble Space Telescope, is a very thin section of a supernova remnant caused by a stellar explosion that occurred more than 1,000 years ago.

On or around 1 May 1006 A.D., observers from Africa to Europe to the Far East witnessed and recorded the arrival of light from what is now called SN 1006, a tremendous supernova explosion caused by the final death throes of a white dwarf star nearly 7,000 light-years away. The supernova was probably the brightest star ever seen by humans, and surpassed Venus as the brightest object in the night time sky, only to be surpassed by the Moon. It was visible even during the day for weeks, and remained visible to the naked eye for at least two and a half years before fading away.

SN 1006 resides within our Milky Way Galaxy. Located more than 14 degrees off the plane of the galaxy's disk, there is relatively little confusion with other foreground and background objects in the field when trying to study this object. In the Hubble image, many background galaxies (orange extended objects) far off in the distant universe can be seen dotting the image. Most of the white dots are foreground or background stars in our Milky Way galaxy.

This image is a composite of hydrogen-light observations taken with Hubble's Advanced Camera for Surveys in February 2006 and Wide Field Planetary Camera 2 observations in blue, yellow-green, and near-infrared light taken in April 2008. The supernova remnant, visible only in the hydrogen-light filter was assigned a red hue in the Heritage colour image.