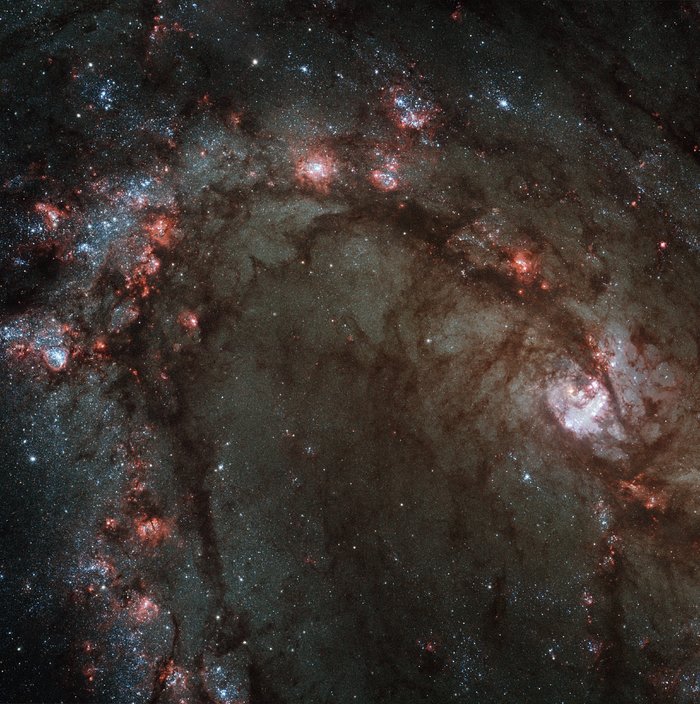 The spectacular new camera installed on the NASA/ESA Hubble Space Telescope during Servicing Mission 4 in May has delivered the most detailed view of star birth in the graceful, curving arms of the nearby spiral galaxy M83.

Nicknamed the Southern Pinwheel, M83 is undergoing more rapid star formation than our own Milky Way galaxy, especially in its nucleus. The sharp "eye" of the Wide Field Camera 3 (WFC3) has captured hundreds of young star clusters, ancient swarms of globular star clusters, and hundreds of thousands of individual stars, mostly blue supergiants and red supergiants.

The image, taken in August 2009, provides a close-up view of the myriad stars near the galaxy's core, the bright whitish region at far right.

The image reveals in unprecedented detail the current rapid rate of star birth in this famous "grand design" spiral galaxy. The newest generations of stars are forming largely in clusters on the edges of the dark dust lanes, the backbone of the spiral arms. These fledgling stars, only a few million years old, are bursting out of their dusty cocoons and producing bubbles of reddish glowing hydrogen gas.

The excavated regions give a colourful "Swiss cheese" appearance to the spiral arm. Gradually, the young stars' fierce winds (streams of charged particles) blow away the gas, revealing bright blue star clusters. These stars are about 1 million to 10 million years old. The older populations of stars are not as blue.

A bar of stars, gas, and dust slicing across the core of the galaxy may be instigating most of the star birth in the galaxy's core. The bar funnels material to the galaxy's centre, where the most active star formation is taking place. The brightest star clusters reside along an arc near the core.

The remains of about 60 supernova blasts, the deaths of massive stars, can be seen in the image, five times more than known previously in this region. WFC3 identified the remnants of exploded stars. By studying these remnants, astronomers can better understand the nature of the progenitor stars, which are responsible for the creation and dispersal of most of the galaxy's heavy elements.

M83, located in the Southern Hemisphere, is often compared to M51, dubbed the Whirlpool galaxy, in the Northern Hemisphere. Located 15 million light-years away in the constellation Hydra, M83 is two times closer to Earth than M51.