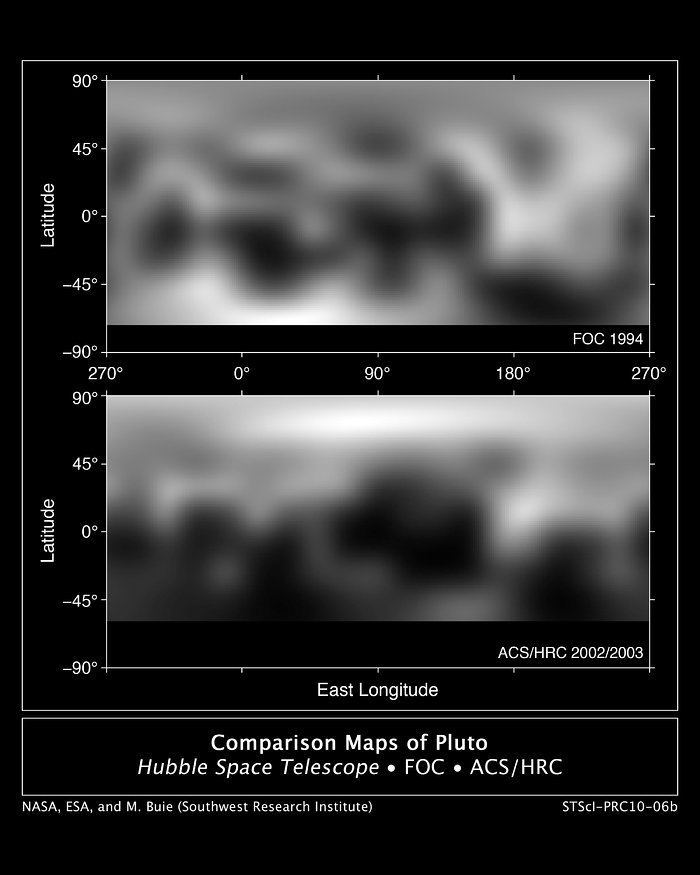 These are two Hubble photo maps of the dwarf planet Pluto, as seen in 1994 and 2002-2003. Hubble's view isn't sharp enough to see craters or mountains, if they exist on the surface, but Hubble does reveal a complex-looking and variegated world with white and charcoal-black terrain. The white areas are surface frost, and the dark areas are a carbon-rich residue caused by sunlight breaking up methane that is present on Pluto's surface.

A comparison of the maps shows that Pluto's brightness has changed between 1994 and 2003. The northern pole is brighter and the southern hemisphere is darker. Summer is approaching Pluto's north pole, and this may cause surface ices to melt and refreeze in the colder shadowed portion of the planet.

The Hubble pictures underscore that Pluto is not simply a ball of ice and rock but a dynamic world that undergoes dramatic atmospheric changes. These atmospheric changes are driven by seasonal changes that are as much propelled by the planet's 248-year elliptical orbit as its axial tilt, unlike Earth where the tilt alone drives seasons.

The top picture was taken in 1994 by the European Space Agency's Faint Object Camera. The bottom image was taken in 2002-2003 by the Advanced Camera for Surveys. The dark band at the bottom of each map is the region that was hidden from view at the time the data were taken.