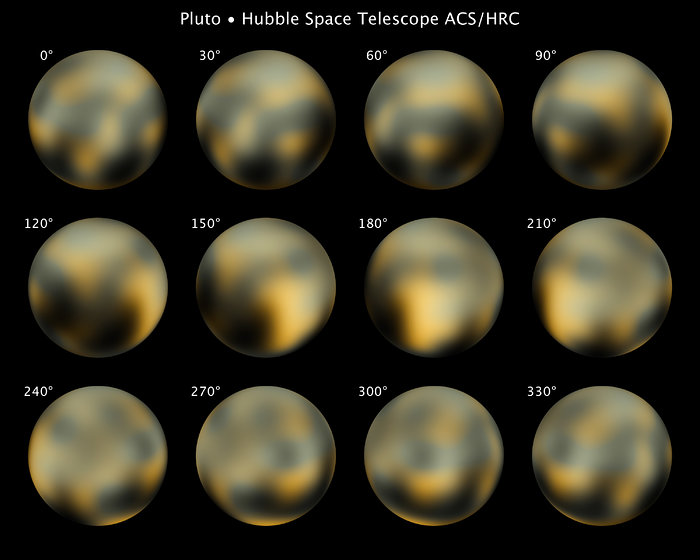 This is the most detailed view to date of the entire surface of the dwarf planet Pluto, as constructed from multiple NASA/ESA Hubble Space Telescope photographs taken from 2002 to 2003. NASA's New Horizons space probe, now halfway to Pluto, will get sharper images of Pluto when it is six months away from a close flyby in 2015.

Hubble's view isn't sharp enough to see craters or mountains, if they exist on the surface, but Hubble reveals a complex-looking and variegated world with white, dark-orange, and charcoal-black terrain. The overall colour is believed to be a result of ultraviolet radiation from the distant Sun breaking up methane that is present on Pluto's surface, leaving behind a dark, molasses-coloured, carbon-rich residue.

Pluto is so small and distant that the task of resolving the surface is as challenging as trying to see the markings on a soccer ball 65 kilometres away. The Hubble raw images are a few pixels wide. But through a technique called dithering, multiple, slightly offset pictures can be combined through computer-image processing to synthesize a higher-resolution view than could be seen in a single exposure. This series of pictures took four years and 20 computers operating continuously and simultaneously to accomplish.