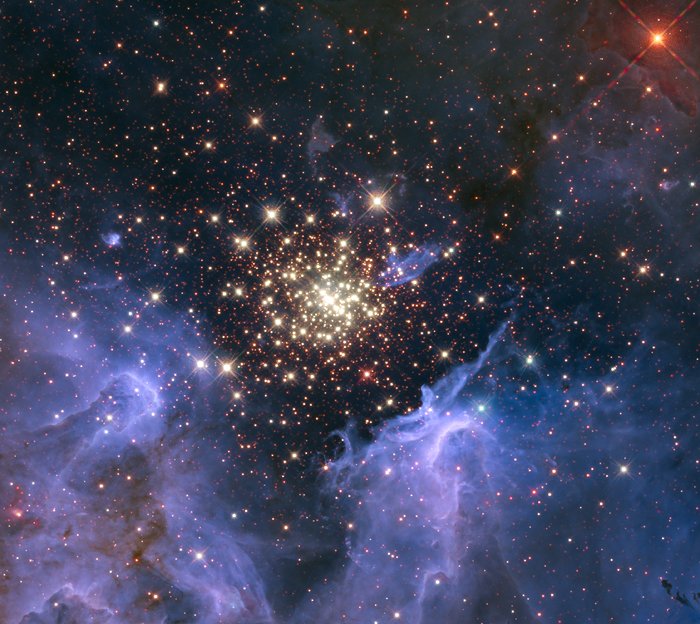 Like a 4th of July fireworks display, a young, glittering collection of stars looks like an aerial burst. The cluster is surrounded by clouds of interstellar gas and dust—the raw material for new star formation. The nebula, located 20,000 light-years away in the constellation Carina, contains a central cluster of huge, hot stars, called NGC 3603.

This environment is not as peaceful as it looks. Ultraviolet radiation and violent stellar winds have blown out an enormous cavity in the gas and dust enveloping the cluster, providing an unobstructed view of the cluster.

Most of the stars in the cluster were born around the same time but differ in size, mass, temperature, and colour. The course of a star's life is determined by its mass, so a cluster of a given age will contain stars in various stages of their lives, giving an opportunity for detailed analyses of stellar life cycles. NGC 3603 also contains some of the most massive stars known. These huge stars live fast and die young, burning through their hydrogen fuel quickly and ultimately ending their lives in supernova explosions.

Star clusters like NGC 3603 provide important clues to understanding the origin of massive star formation in the early, distant Universe. Astronomers also use massive clusters to study distant starbursts that occur when galaxies collide, igniting a flurry of star formation. The proximity of NGC 3603 makes it an excellent lab for studying such distant and momentous events.

This Hubble Space Telescope image was captured in August 2009 and December 2009 with the Wide Field Camera 3 in both visible and infrared light, which trace the glow of sulfur, hydrogen, and iron.