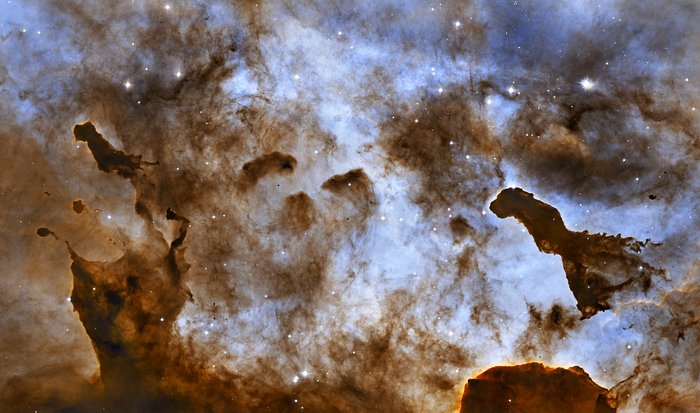 Enjoying a frozen treat on a hot summer day can leave a sticky mess as it melts in the Sun and deforms. In the cold vacuum of space, there is no edible ice cream, but there is radiation from massive stars that is carving away at cold molecular clouds, creating bizarre, fantasy-like structures.

These one-light-year-tall pillars of cold hydrogen and dust, imaged by the Hubble Space Telescope, are located in the Carina Nebula. Violent stellar winds and powerful radiation from massive stars are sculpting the surrounding nebula. Inside the dense structures, new stars may be born.

This image of dust pillars in the Carina Nebula is a composite of 2005 observations taken of the region in hydrogen light (light emitted by hydrogen atoms) along with 2010 observations taken in oxygen light (light emitted by oxygen atoms), both times with Hubble's Advanced Camera for Surveys. The immense Carina Nebula is an estimated 7,500 light-years away in the southern constellation Carina.