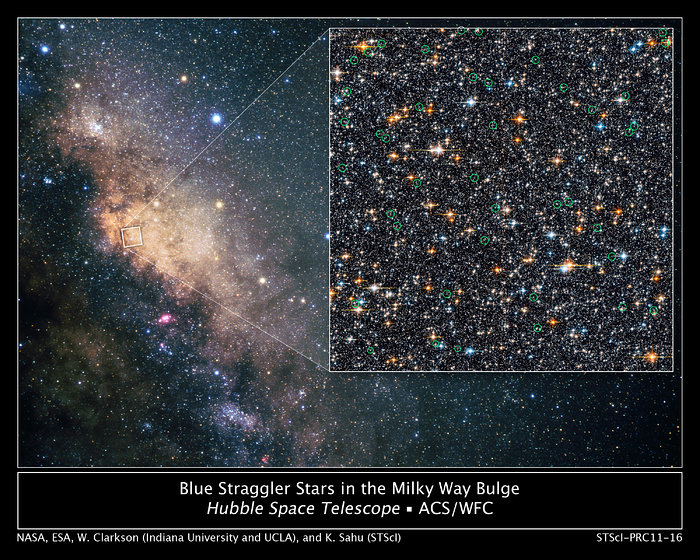 Peering deep into the star-filled, ancient hub of our Milky Way (left), the Hubble Space Telescope has found a rare class of oddball stars called blue stragglers, the first time such objects have been detected within our galaxy's bulge.

Blue stragglers — so named because they seem to be lagging behind in their rate of aging compared with the population from which they formed — were first found inside ancient globular star clusters half a century ago.

This discovery is a spin-off from a seven-day-long survey conducted in 2006 called the Sagittarius Window Eclipsing Extrasolar Planet Search (SWEEPS). Hubble peered at and obtained variability information for 180,000 stars in the crowded central bulge of our galaxy, 26,000 light-years away. The picture at right shows the 42 blue straggler candidates circled in green.

Blue stragglers have long been suspected to be located in the bulge. Until now, it has never been proven because younger stars in the disk of our galaxy lie along the line-of-sight to the core, confusing and contaminating the view. But Hubble's view is so sharp that astronomers could distinguish the motion of the core population from foreground stars in the Milky Way.

It's not clear how blue stragglers form, or if there is more than one mechanism at work. A common idea is that two stars collide and merge. This stirs up hydrogen fuel and causes the resulting, more massive star to undergo nuclear fusion at a faster rate, causing it to burn hotter and bluer.

The visible-light observations were made with Hubble's Advanced Camera for Surveys.