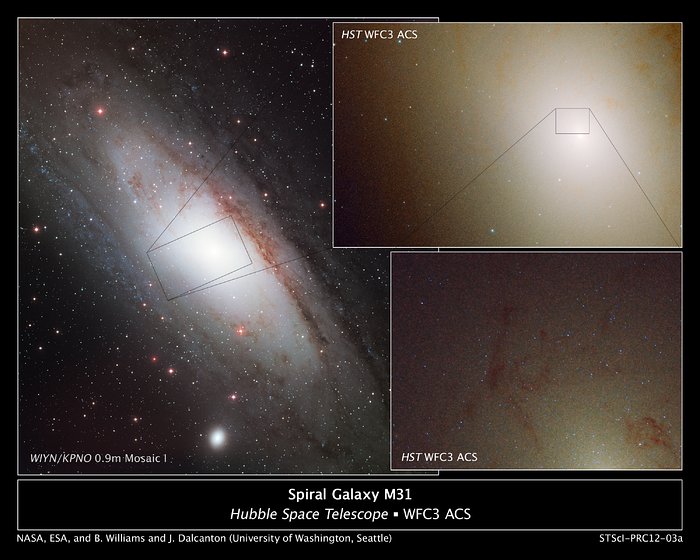 The image at left shows the nearby, majestic Andromeda galaxy. The rectangular box marks the region probed by NASA's Hubble Space Telescope.

Hubble's view, taken with the Wide Field Camera 3 and the Advanced Camera for Surveys, is shown in the images on the right. The images are a blend of visible and ultraviolet light. The photo at top right is 7,900 light-years across and reveals the galaxy's crowded central region. The bright area near the center of the image is a grouping of stars nestled around the galaxy's black hole. The blue dots sprinkled throughout the image are ultra-blue stars whose population increases around the crowded hub. The blue stars are old Sun-like stars that have prematurely cast off their outer layers of material, exposing their extremely blue-hot cores. The square box outlines a close-up view of an area around the core.

The detailed image, shown at bottom right, reveals a richer population of blue stars huddled around the core. Dark dust clouds also are visible. The image is 740 light-years wide.

The right-hand images, taken with Hubble, are part of a census of stars in M31 called the Panchromatic Hubble Andromeda Treasury survey.

The image of the Andromeda galaxy was taken on 13 June 2001, with the WIYN/KPNO 0.9-meter Mosaic I by T. Rector and B. Wolpa of the National Optical Astronomy Observatory in Tucson, Arizona (USA).