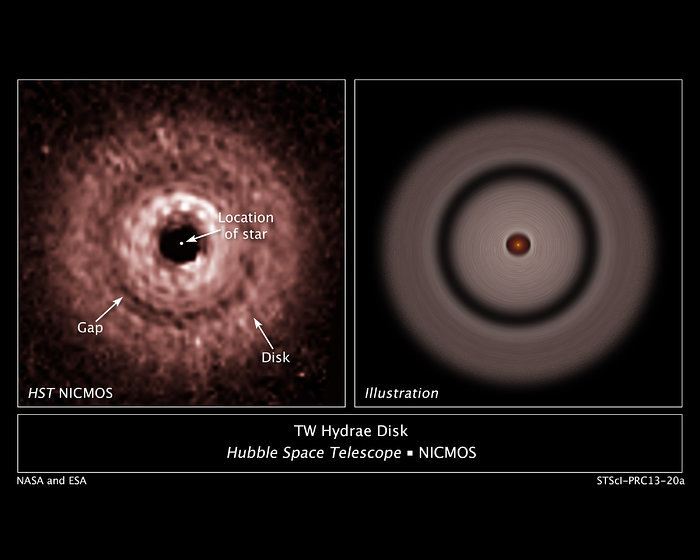 This graphic shows a gap in a protoplanetary disc of dust and gas whirling around the nearby red dwarf star TW Hydrae.

The gap's presence is best explained as due to the effects of a growing, unseen planet that is gravitationally sweeping up material and carving out a lane in the disc, like a snow plow.

In the NASA/ESA Hubble Space Telescope image at left, a gap can be seen about 12 billion kilometres away from the star in the centre of the disc. If the putative planet orbited in our Solar System, it would be roughly twice Pluto's distance from our Sun. The image was taken in near-infrared light by the Near Infrared Camera and Multi-Object Spectrometer (NICMOS).

Astronomers used a masking device on NICMOS to block out the star's bright light so that the disc's structure could be seen. The Hubble observations reveal that the gap, which is just over 3 billion kilometres wide, is not completely cleared out. The graphic at right shows the gap relative to the star. TW Hydrae resides 176 light-years away in the constellation of Hydra (The Sea Serpent).

These Hubble observations were taken on 9 June 2005.