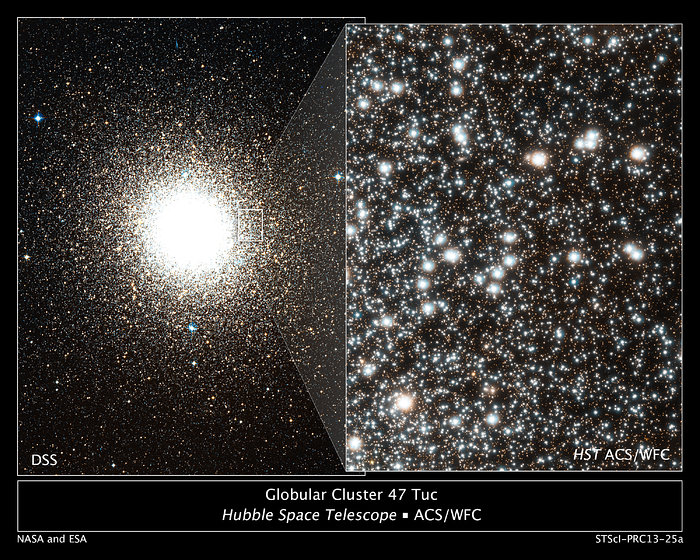 These images showcase the ancient globular cluster 47 Tucanae, a dense swarm of up to a million stars.

The image on the left shows the entire cluster, which measures about 120 light-years across. Located in the southern constellation Tucana (The Toucan), the cluster is about 16700 light-years away. The image is part of the Digitized Sky Survey (DSS) and was taken by the UK Schmidt Telescope at Siding Spring Observatory in New South Wales, Australia. The white rectangular box outlines the view taken by the NASA/ESA Hubble Space Telescope.

That image, shown at right, captures close-up views of thousands of cluster stars. The large bright stars in the image are red giants. These stars have puffed up to several times their normal size because they have exhausted their nuclear fuel and are near the end of their lives. The image was taken by Hubble's Advanced Camera for Surveys.

Astronomers used these Hubble observations along with archival Hubble data of 47 Tucanae to accurately measure the changes in positions of more than 30 000 cluster stars. Based on those measurements, the astronomers pieced together the stars' histories, finding two populations of stars that have different chemical compositions and different motions. Understanding the dynamics of the 47 Tucanae stars can yield insights into how this cluster formed its stars.