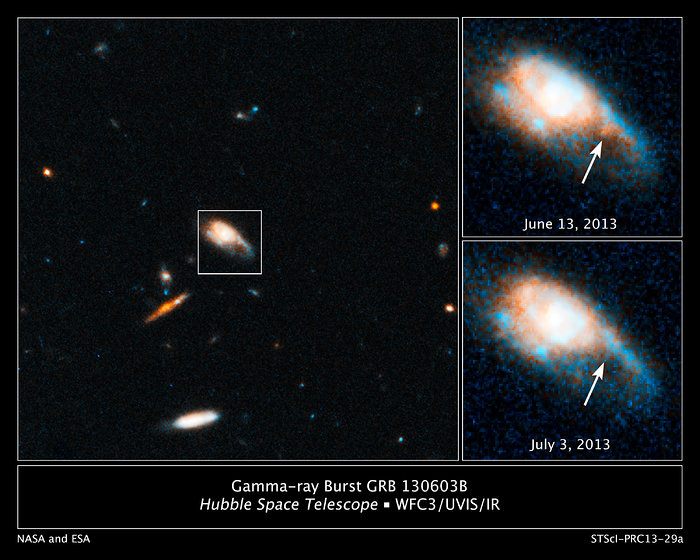 These images taken by the NASA/ESA Hubble Space Telescope reveal a new type of stellar explosion produced from the merger of two compact objects.

Hubble spotted the outburst while looking at the aftermath of a short-duration gamma-ray burst, a mysterious flash of intense high-energy radiation that appears from random directions in space. Short-duration blasts last at most a few seconds. They sometimes, however, produce faint afterglows in visible and near-infrared light that continue for several hours or days and help astronomers to pinpoint the exact location of the burst.

In the image on the left, the galaxy in the centre produced the gamma-ray burst, designated GRB 130603B. A probe of the galaxy with Hubble's Wide Field Camera 3 on June 13, 2013, revealed a glow in near-infrared light at the source of the gamma-ray burst, shown in the top right image. When Hubble observed the same location on July 3, the source had faded, shown in the below right image. The fading glow provided key evidence that it was the decaying fireball of a new type of stellar blast called a "kilonova".

Kilonovas are about 1000 times brighter than a nova, which is caused by the eruption of a white dwarf. But they are 1/10th to 1/100th the brightness of a typical supernova, the self-detonation of a massive star.