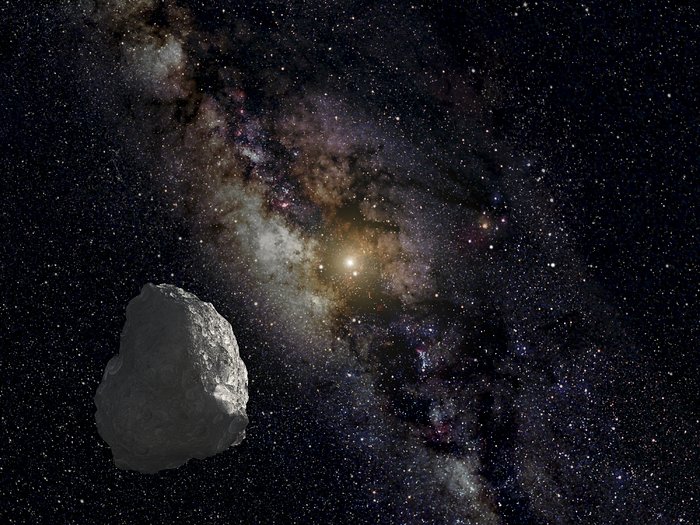 This is an artist's impression of a Kuiper Belt object (KBO), located on the outer rim of our Solar System at a staggering distance of 6.5 billion kilometres from the Sun.

Unlike asteroids, KBOs have not been heated by the Sun, and so are thought to represent a pristine, well preserved, deep-freeze sample of what the outer Solar System was like following its birth 4.6 billion years ago.

The Sun appears as a bright star at image centre of this graphic, which represents the view from the KBO. The Earth and other inner planets are too close to the Sun to be seen in the illustration. The bright dot to the left of the Sun is the planet Jupiter, and the bright object below the Sun is the planet Saturn.

Two bright pinpoints of light to the right of the Sun, midway to the edge of the frame, are the planets Uranus and Neptune, respectively. The planet positions are plotted for late 2018. The Milky Way appears in the background.

A Hubble survey has uncovered three KBOs, ranging from 43 to 56 kilometres across, that are potentially reachable by NASA's New Horizons spacecraft after it passes by Pluto in mid-2015.