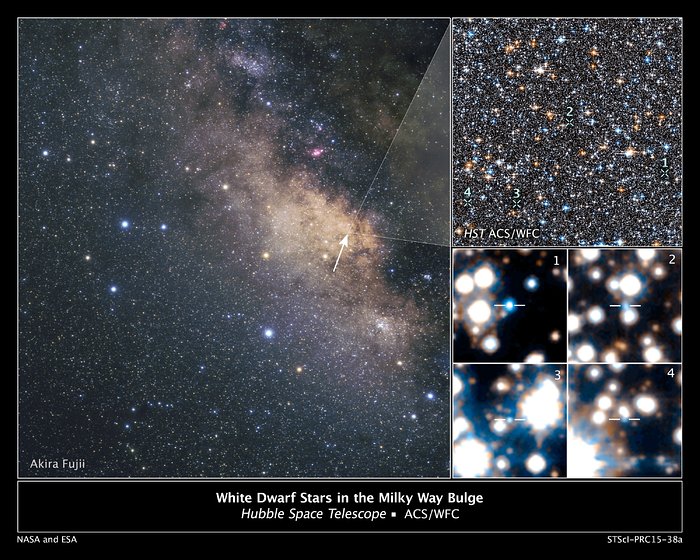 The NASA/ESA Hubble Space Telescope has detected for the first time a population of white dwarfs embedded in the hub of our Milky Way galaxy. The Hubble images are the deepest, most detailed study of the galaxy's central bulge of stars. The smoldering remnants of once-vibrant stars can yield clues to our galaxy's early construction stages that happened long before Earth and our sun formed.

[Left] - This is a view of the Milky Way's central bulge, seen in the direction of the constellation Sagittarius. Giant dust clouds along this line block most of the starlight coming from the galactic center. Hubble, however, peered through a region (marked by the arrow) called the Sagittarius Window, which offers a keyhole view into the galaxy's hub.

[Upper right] - This is a small section of Hubble's view of the dense collection of stars crammed together in the galactic bulge. The region surveyed is part of the Sagittarius Window Eclipsing Extrasolar Planet Search (SWEEPS) field and is located 26,000 light-years away.

[Lower right] - Hubble uncovered extremely faint and hot white dwarfs. This is a sample of 4 out of the 70 brightest white dwarfs spied by Hubble in the Milky Way's bulge. Astronomers picked them out based on their faintness, blue-white color, and motion relative to our sun. The numbers in the inset images correspond to the white dwarfs' location in the larger Hubble view. Hubble's Advanced Camera for Surveys made the observations in 2004 and 2011-2013.

Credit for Hubble Images: NASA, ESA, A. Calamida and K. Sahu (STScI), and the SWEEPS Science Team
Credit for Ground-based Image: A. Fujii