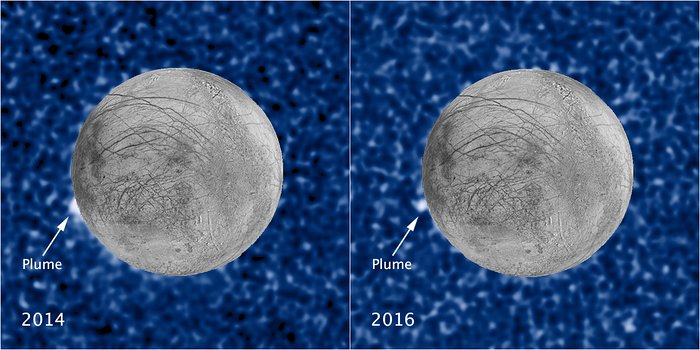 These composite images show a suspected plume of material erupting two years apart from the same location on Jupiter's icy moon Europa. The images bolster evidence that the plumes are a real phenomenon, flaring up intermittently in the same region on the satellite.

Both plumes, photographed in ultraviolet light by the NASA/ESA Hubble Space Telescope, were seen in silhouette as the moon passed in front of Jupiter.

The newly imaged plume, shown at right, rises about 100 kilometres above Europa's frozen surface. The image was taken on 22 February 2016. The plume in the image at left, observed by Hubble on 17 March 2014, originates from the same location. It is estimated to be about 40 kilometres high. The snapshot of Europa, superimposed on the Hubble image, was assembled from data from NASA's Galileo mission to Jupiter.

The plumes correspond to the location of an unusually warm spot on the moon's icy crust, seen in the late 1990s by the Galileo spacecraft. Researchers speculate that this might be circumstantial evidence for water venting from the moon's subsurface. The material could be associated with the global ocean that is believed to be present beneath the frozen crust.