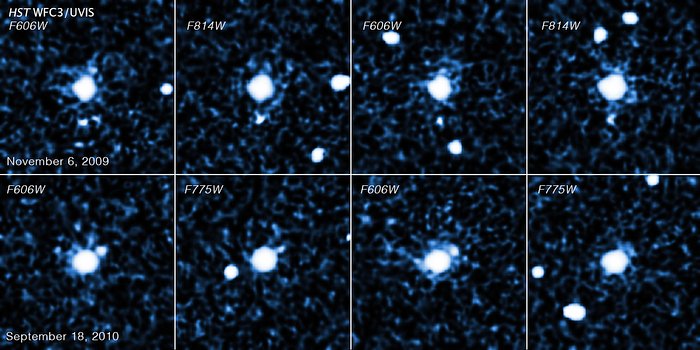 This sequence of images, taken by the NASA/ESA Hubble Space Telescope's Wide Field Camera 3, shows a moon circling the trans-Neptunian object 2007 OR10. The top four images were taken on 6 November 2009; the bottom four on 18 September 2010.

As 2007 OR10 orbits the Sun, it changes position with respect to the background stars (the bright objects that change from panel to panel). The snapshots reveal that the moon moves with the trans-Neptunian object, proving that it is gravitationally bound to the larger body.

2007 OR10 is the third-largest known trans-Neptunian object, behind Pluto and Eris, and the largest unnamed world in the Solar System. The pair is located in the Kuiper Belt, a realm of icy debris left over from the solar system's formation.

The trans-Neptunian object is about 1520 kilometres across; the moon is estimated to be 240 kilometres to 400 kilometres in diameter. 2007 OR10, like Pluto, follows an eccentric orbit, but it is currently three times farther than Pluto is from the Sun.