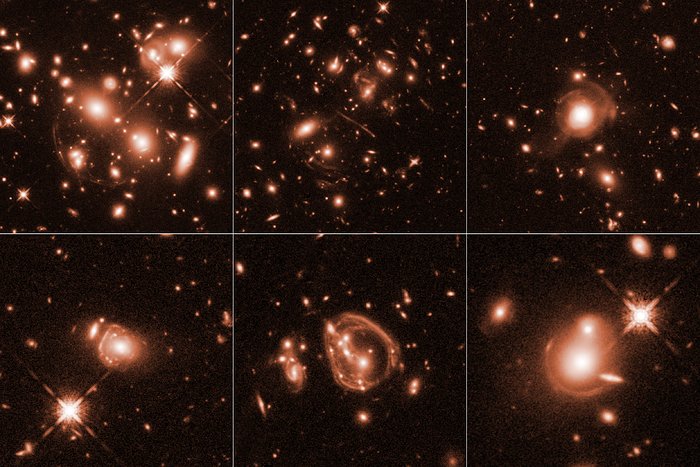 These six images, taken by the NASA/ESA Hubble Space Telescope, reveal a jumble of misshapen-looking galaxies punctuated by exotic patterns such as arcs, streaks, and smeared rings. These unusual features are the stretched shapes of the brightest infrared galaxies in the Universe that are boosted by natural cosmic magnifying lenses. This effect, called gravitational lensing, occurs when the intense gravity of a massive galaxy or cluster of galaxies magnifies the light of more distant background sources.

The distant, lensed galaxies are as much as 10 000 times more luminous than our Milky Way. The lensing phenomenon allows for features as small as about 100 light-years or less across to be seen in the background galaxies.

The galaxies existed between 8 billion and 11.5 billion years ago, when the Universe was making stars more vigorously than it is today. The galaxies are ablaze with runaway star formation, creating more than 10 000 new stars a year. This star-birth frenzy creates lots of dust, which enshrouds the galaxies, making them too faint to detect in visible light. But they glow fiercely in infrared light, shining with the brilliance of 10 trillion to 100 trillion suns.

The infrared galaxies in these images are part of a Hubble survey of 22 distant ultra-luminous infrared galaxies that were found by ground- and space-based observatories. The images were taken in infrared light by Hubble's Wide Field Camera 3.