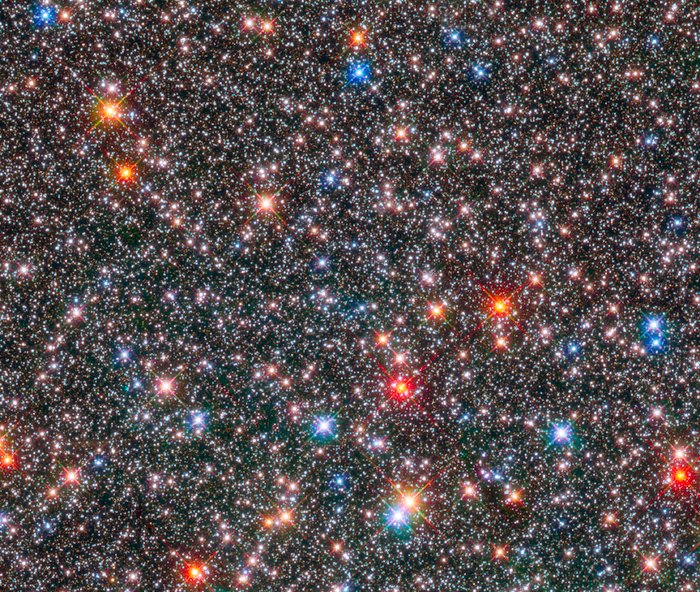 This image from the NASA/ESA Hubble Space Telescope shows a sparkling jewel box full of stars captured the heart of our Milky Way.

Aging red giant stars coexist with their more plentiful younger cousins, the smaller, white, Sun-like stars, in this crowded region of our galaxy’s ancient central hub, or bulge. Most of the bright blue stars in the image are probably recently formed stars located in the foreground, in the galaxy's disc. Astronomers studied 10 000 of these Sun-like stars in archival Hubble images over a nine-year period to unearth clues to our galaxy’s evolution.

The study reveals that the Milky Way’s bulge is a dynamic environment of variously aged stars zipping around at different speeds, like travelers bustling about a busy airport.

The researchers found that the motions of bulge stars are different, depending on a star’s chemical composition. Stars richer in elements heavier than hydrogen and helium have less disordered motions, but are orbiting around the galactic centre faster than older stars that are deficient in heavier elements.

The image is a composite of exposures taken in near-infrared and visible light with Hubble’s Wide Field Camera 3. The observations are part of two Hubble surveys: the Galactic Bulge Treasury Program and the Sagittarius Window Eclipsing Extrasolar Planet Search.

The centre of our galaxy is about 26 000 light-years away.