Three steps to the Hubble constant 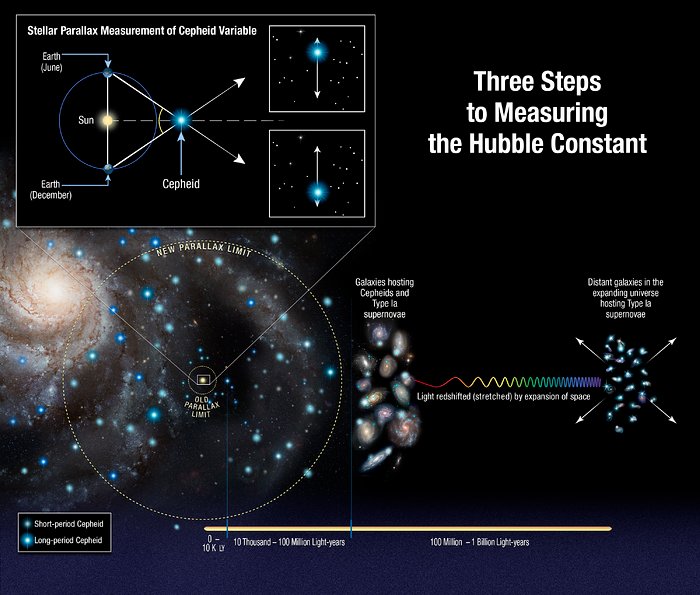 This illustration shows the three steps astronomers used to measure the expansion rate of the Universe to an unprecedented accuracy, reducing the total uncertainty to 2.3 %. Astronomers made the measurements by streamlining and strengthening the construction of the cosmic distance ladder, which is used to measure accurate distances to galaxies near to and far from Earth.

Beginning at left, astronomers use the NASA/ESA Hubble Space Telescope to measure the distances to a class of pulsating stars called Cepheid variables, employing a basic tool of geometry called parallax. Parallax is the apparent shift of an object's position due to a change in an observer's point of view. The box at top left shows how astronomers used Hubble to measure the parallax to Cepheid variables. The Hubble astronomers had to gauge the apparent tiny wobble of the Cepheids due to Earth’s motion around the Sun. These wobbles are roughly the apparent size of a grain of sand seen 160 kilometers away.

The latest Hubble result is based on measurements of the parallax of eight newly analysed Cepheids in our Milky Way galaxy. These stars are about 10 times farther away than any studied previously, residing between 6000 and 12 000 light-years from Earth and are just like the ones Hubble can see in other galaxies. Once astronomers calibrate the Cepheids' true brightness, they can use them as cosmic yardsticks to measure distances to galaxies much farther away than they can with the parallax technique. The rate at which Cepheids pulsate provides an additional fine-tuning to the true brightness, with slower pulses for more luminous Cepheids. The astronomers compare the calibrated luminosity values with the stars' apparent brightness, as seen from Earth, to determine accurate distances.

Once the Cepheids are calibrated, astronomers move beyond our Milky Way to nearby galaxies (shown at centre). They look for Cepheid stars in galaxies that recently hosted another reliable yardstick: Type Ia supernovae, exploding stars that flare with the same amount of brightness. The astronomers use the Cepheids to measure the luminosity of the supernovae in each host galaxy.

They then look for supernovae in galaxies located even farther away from Earth. Unlike Cepheids, Type Ia supernovae are brilliant enough to be seen from relatively longer distances. The astronomers compare the luminosity and apparent brightness of distant supernovae to measure out to the distance where the expansion of the Universe can be seen. They compare those distance measurements with how the light from the supernovae is stretched to longer wavelengths by the expansion of space. They use these two values to calculate how fast the Universe is expanding now, a number called the Hubble constant.