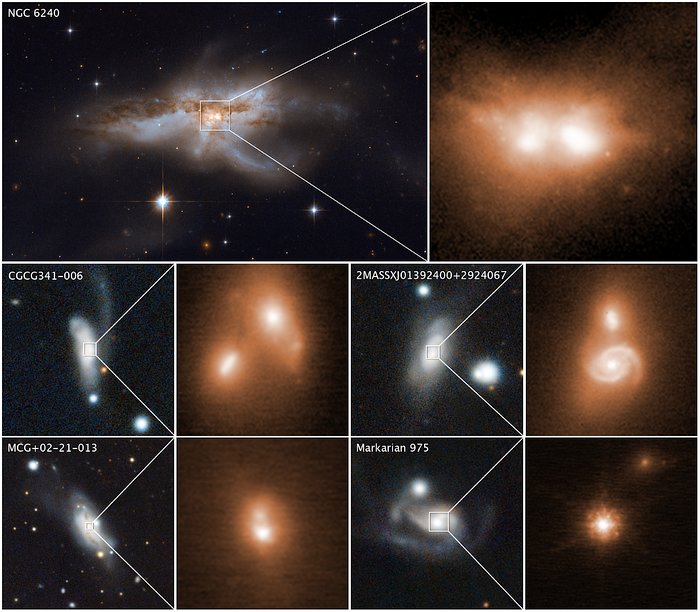 These images reveal the final stage of a union between pairs of galactic nuclei in the messy cores of colliding galaxies.

The image at top left, taken by the Wide Field Camera 3 on the NASA/ESA Hubble Space Telescope, shows the merging galaxy NGC 6240. A close-up of the two brilliant cores of this galactic union is shown at top right. This view, taken in infrared light, pierces the dense cloud of dust and gas encasing the two colliding galaxies and uncovers the active cores. The hefty black holes in these cores are growing quickly as they feast on gas kicked up by the galaxy merger. The black holes' speedy growth occurs during the last 10 million to 20 million years of the merger.

Images of four other colliding galaxies, along with close-up views of their coalescing nuclei in the bright cores, are shown beneath the snapshots of NGC 6240. The images of the bright cores were taken in near-infrared light by the W. M. Keck Observatory in Hawaii, using adaptive optics to sharpen the view.

The reference images (left) of the merging galaxies were taken by the Panoramic Survey Telescope and Rapid Response System (Pan-STARRS).

The two nuclei in the Hubble and Keck Observatory photos are only about 3000 light-years apart — a near-embrace in cosmic terms. If there are pairs of black holes, they will likely merge within the next 10 million years to form a more massive black hole.

These observations are part of the largest-ever survey of the cores of nearby galaxies using high-resolution images in near-infrared light taken by the Hubble and Keck observatories.

The survey galaxies' average distance is 330 million light-years from Earth.