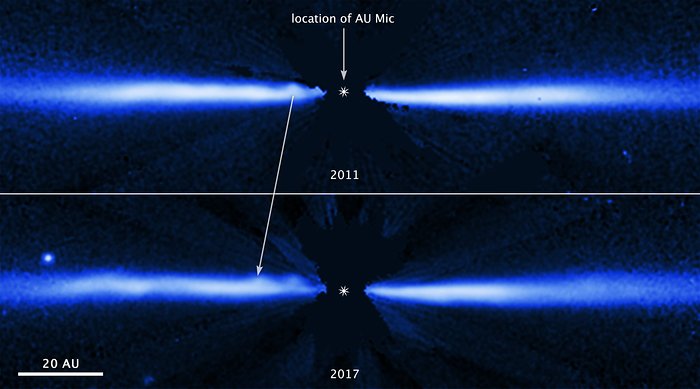 These two images, both taken with the NASA/ESA Hubble Space Telescope, are taken six years apart. They show fast-moving blobs of material sweeping outwardly through a debris disc around the young, nearby red dwarf star AU Microscopii (AU Mic). Red dwarfs are the most abundant and longest-lived stars in our Milky Way. AU Mic, however, is only about 23 million years old, making it a very young star.

The top image was taken in 2011; the bottom in 2017. Hubble's Space Telescope Imaging Spectrograph (STIS) took the images in visible light. This comparison of the two images shows the six-year movement of one of the known blobs (marked by an arrow). Researchers estimate that the blob, which is zipping along at nearly 24 000 kilometres an hour, traveled more than 1300 million kilometres between 2011 and 2017. That is about the distance from Earth to Saturn. Astronomers do not know how the blobs are launched through the system.

Eventually, the blob highlighted in the image will sweep through the disc, escape the star's gravitational grip, and race out into space. Astronomers expect the string of blobs to clear out the disc within 1.5 million years. Their estimated ejection speeds are between 14 000 kilometres per hour and 43 000 kilometres per hour, fast enough to escape the star's gravitational clutches. They currently range in distance from roughly 1500 million kilometres to more than 8800 million kilometres from the star.

The disc, seen edge-on, is illuminated by scattered light from the star. The glare of the star, located at the centre of the disc, has been blocked out by the STIS coronagraph so that astronomers can see more structure in the disc. The bright dot above the left side of the disc in the 2017 image is a background star.

The system resides 32 light-years away in the southern constellation Microscopium.