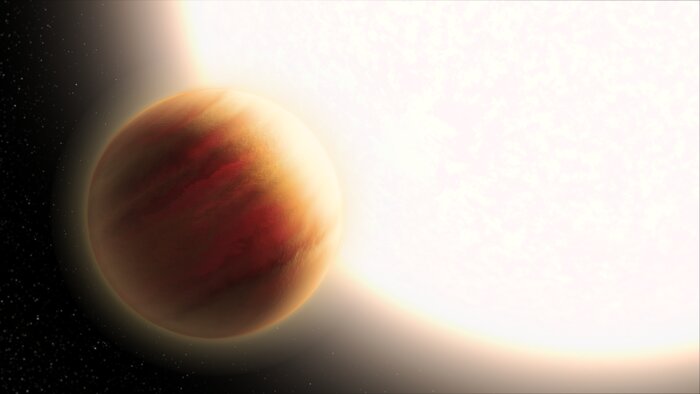 The NASA/ESA Hubble Space Telescope’s data was used to analyze the atmosphere of the super-hot exoplanet WASP-79b, located 780 light-years away in the constellation Eridanus. Among exoplanets, WASP-79b is among the largest ever observed. The planet is larger than Jupiter, and its very deep, hazy atmosphere sizzles at 1,650 degrees Celsius – the temperature of molten glass. The Hubble Space Telescope and other observatories measured how starlight is filtered through the planet's atmosphere, allowing for its chemical composition to be analyzed. Hubble has detected the presence of water vapor.

The surprise in recently published results, is that the planet's sky doesn't have any evidence for an atmospheric phenomenon called Rayleigh scattering, where certain colors of light are dispersed by very fine dust particles in the upper atmosphere. Rayleigh scattering is what makes Earth's skies blue by scattering the shorter (bluer) wavelengths of sunlight.

Because WASP-79b doesn't seem to have this phenomenon, the daytime sky would likely be yellowish, researchers say.