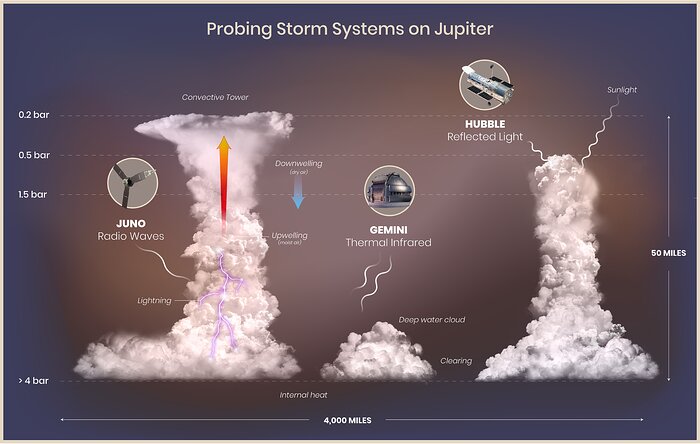 Thanks to collaborative observations by the NASA/ESA Hubble Space Telescope, the Gemini Observatory, and the Juno spacecraft, scientists have probed deeper into the atmosphere of the planet Jupiter. This collection of observations have facilitated the monitoring of Jupiter's weather and to estimate the amount of water in the atmosphere, providing insight into how Jupiter operates today as well as how it and the other planets in our solar system formed more than four-and-a-half billion years ago.

This illustration of lightning, convective towers (thunderheads), deep water clouds, and clearings in Jupiter's atmosphere is based on data collected by these observatories. The Hubble Space Telescope has detected sunlight that is reflected off clouds in Jupiter's atmosphere. Different wavelengths penetrate to different depths in the clouds, giving researchers the ability to determine the relative heights of cloud tops.