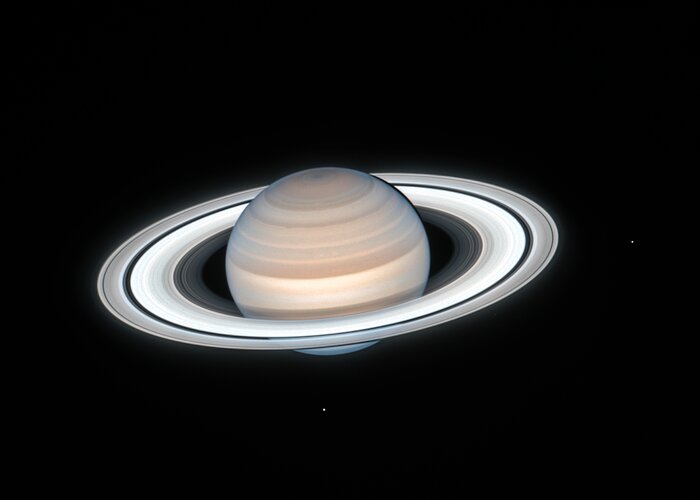 This new image from the NASA/ESA Hubble Space Telescope was taken on 4 July, 2020, when the opulent giant world was 1350 million kilometres from Earth. This new Saturn image was taken during summer in the planet's northern hemisphere.

Hubble found a number of small atmospheric storms. These are transient features that appear to come and go with each yearly Hubble observation. The banding in the northern hemisphere remains pronounced as seen in Hubble's 2019 observations, with several bands slightly changing color from year to year. The ringed planet's atmosphere is mostly hydrogen and helium with traces of ammonia, methane, water vapor, and hydrocarbons that give it a yellowish-brown color.

Hubble photographed a slight reddish haze over the northern hemisphere in this color composite. This may be due to heating from increased sunlight, which could either change the atmospheric circulation or perhaps remove ices from aerosols in the atmosphere. Another theory is that the increased sunlight in the summer months is changing the amounts of photochemical haze produced.

Two of Saturn's icy moons are also clearly visible in this exposure: Mimas at right, and Enceladus at bottom.