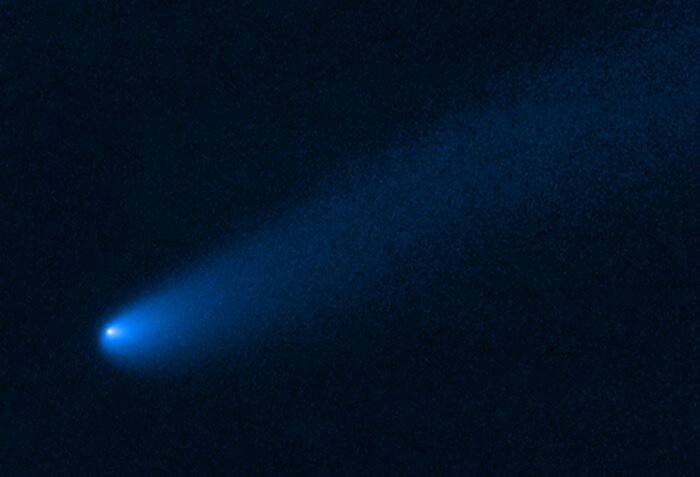 The NASA/ESA Hubble Space Telescope snapped this image of the young comet P/2019 LD2 as it orbits near Jupiter's captured ancient asteroids, which are called Trojans. This icy object is the first comet astronomers have spotted near the Trojan population.

The Hubble view reveals a 640,000-kilometer-long tail of dust and gas flowing from the wayward comet's bright solid nucleus. The tail is evidence that the icy object is active, despite its great distance from the faint Sun. The tail could be driven by the release of carbon monoxide and carbon dioxide. These volatiles do not need much sunlight to heat their frozen form and convert them to gas.

The wayfaring comet was discovered in early June 2019 by the University of Hawaii's Asteroid Terrestrial-impact Last Alert System (ATLAS) telescope.

The icy interloper is most likely one of the latest members of the so-called "bucket brigade" of comets to travel inward toward the Sun after getting kicked out of its frigid home in the Kuiper belt through interactions with the outermost giant planet, Neptune.

Located on the outskirts of our solar system, the Kuiper belt is a haven of icy, leftover debris from our planets' construction 4.6 billion years ago.

The vagabond comet is a temporary resident among Jupiter's asteroids. Computer simulations show that the unexpected guest will have a close encounter with Jupiter in roughly another two years. The massive planet will boot the comet toward the inner solar system.

This Hubble visible-light image is a combination of exposures taken April 1 and May 8, 2020, with the Wide Field Camera 3.