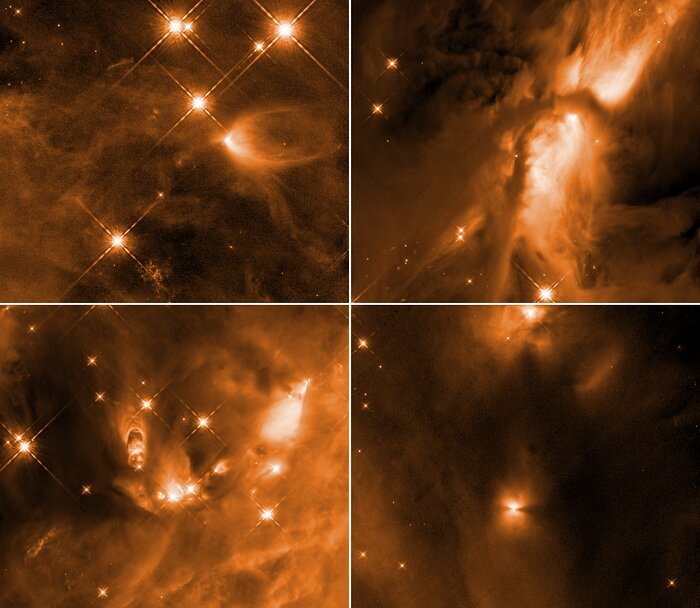 These four images taken by the NASA/ESA Hubble Space Telescope reveal the chaotic birth of stars in the Orion complex, the nearest major star-forming region to Earth.

The snapshots show fledgling stars buried in dusty gaseous cocoons announcing their births by unleashing powerful winds, as well as pairs of spinning, lawn-sprinkler-style jets shooting off in opposite directions. Near-infrared light pierces the dusty region to unveil details of the birthing process.

The stellar outflows are carving out cavities within the gas cloud, composed of hydrogen gas. This relatively brief birthing stage lasts about 500,000 years.

Although the stars themselves are shrouded in dust, they emit powerful radiation, which strikes the cavity walls and scatters off dust grains, illuminating in infrared light the gaps in the gaseous envelopes. Astronomers found that the cavities in the surrounding gas cloud sculpted by a forming star’s outflow did not grow regularly as they matured, as theories propose.

The young stars in these images are just a subset of an ambitious study of 304 developing stars, the largest-ever to date. Researchers used data previously collected from Hubble as well as the NASA Spitzer Space Telescope and the European Space Agency's Herschel Space Telescope.