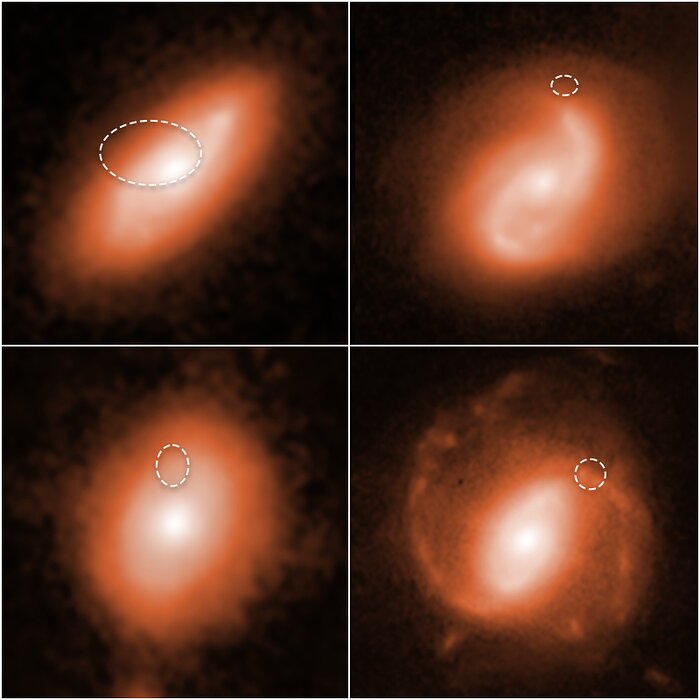 Hunting for the neighborhoods of enigmatic, fast radio bursts (FRBs), astronomers using the NASA/ESA Hubble Space Telescope tracked four of them to the spiral arms of the four distant galaxies shown in the image. The bursts are catalogued as FRB 190714, at top left; FRB 191001, at top right; FRB 180924, at bottom left; and FRB 190608, at bottom right.

Because these radio pulses disappear in much less than the blink of an eye, researchers have had a hard time tracking down where they come from.

The galaxies are far from Earth, appearing as they looked billions of years ago. With the help of Hubble's sharp vision, astronomers pinpointed the fast radio bursts' location (denoted by the dotted oval lines) to the galaxies' spiral arms.

These galaxies are part of a survey to determine the origin of these brilliant flares, which can release as much energy in a thousandth of a second as the Sun does in a year.

Identifying the radio bursts' location helped researchers narrow the list of possible FRB sources that can generate such prodigious tsunamis of energy. One of the leading possible explanations is a torrential blast from a young magnetar. Magnetars are a type of neutron star with extraordinarily powerful magnetic fields.

The observations were made in ultraviolet and near-infrared light with Hubble's Wide Field Camera 3. The images were taken between November 2019 and April 2020.